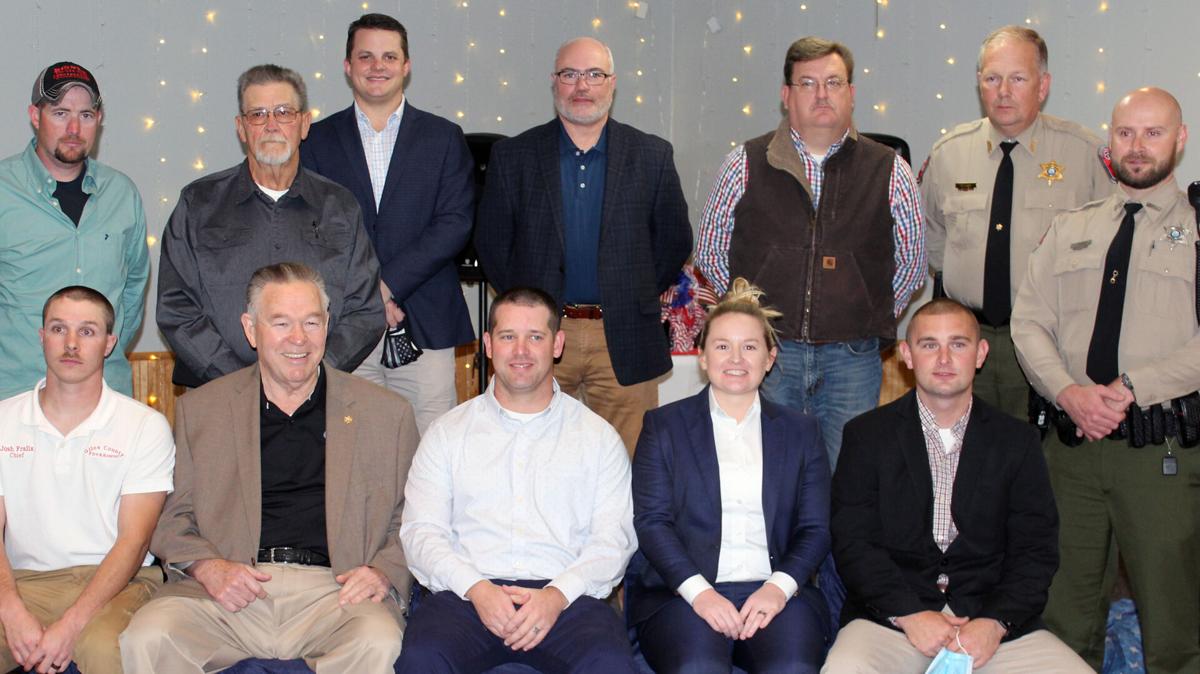 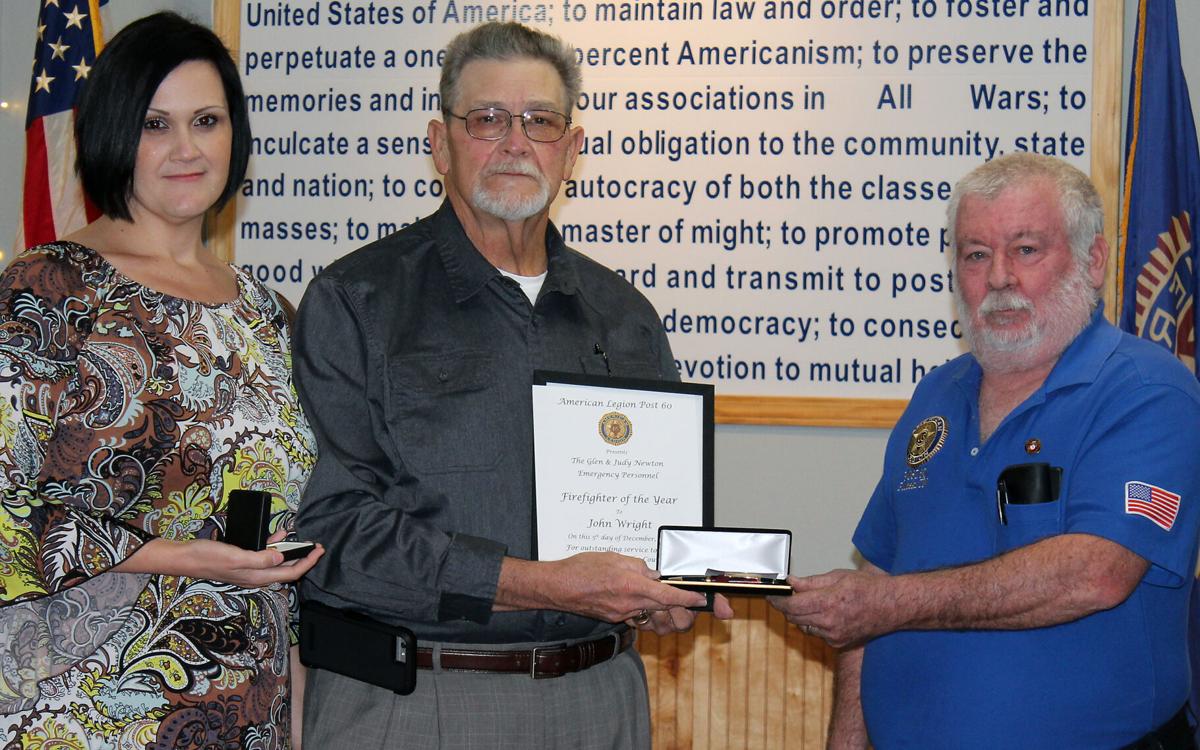 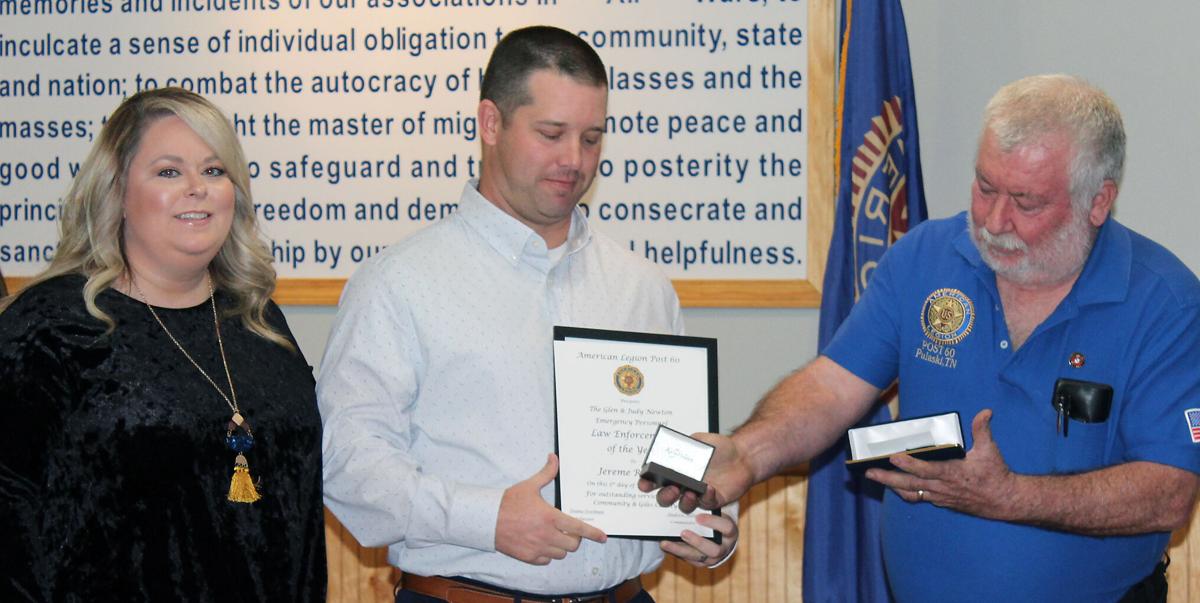 With Post 60 turning 101 years old, it was decided to commemorate this milestone with recognizing emergency personnel who provide services to Giles County, Adjutant Diana Steelman said.

“John Wright has been an active and continuous member of the Giles County Fire and Rescue squad since 1980,” Chief Josh Fralix said. “During that time, he held the rank of captain for the Prospect station for many years and is currently serving on the board of directors.

“John can always be counted on and he has put in countless hours serving the citizens of Giles County to include training new firefighters,” Fralix added of Wright.

Russell has served as a volunteer firefighter for 34 years and is currently the Pulaski station’s captain.

“He is a TARS instructor for the state and has given countless hours of his time to support the citizens of this county,” Fralix said of Russell. “He can always be counted on.”

Risner has been a captain at the Rose Hill station for five of his past 14 years of serving on the rescue squad.

“[He] spends countless hours working to ensure that location is the best it possibly can be,” Fralix said. “Justin is well known for his work in making the community as safe as possible.”

Risner received the 2019 Officer of the Year Award due to “his outstanding performance,” Fralix added.

Of Robison, “I have seen him become a leader to other officers and observed the range of emotions stemming from dealing with the best and worst our society has to offer,” wife Miranda Robison said. “I have seen the sense of belonging and purpose being a police officer brings to him.

“I also see the many friends you acquire and family you become when you are in law enforcement.”

Being the only female investigator in her department with the Pulaski Police, Ramsey’s cases tend to include women and children who have been victimized, wife Maddie Holt said.

“While her work is confidential, I see how emotionally taxing and exhausting it can be,” Holt explained. “Jordan always places the needs of others ahead of her own interests and loves all humans without conditions.”

After graduating from the Tennessee Highway Patrol in 2015 and becoming a member of the THP, Coble was assigned to Giles County in 2018.

“A Tennessee State Trooper is expected to live his life with a certain code of ethics such as professionalism, integrity, pride, duty, honor and respect,” Sgt. Josh Culp said. “I can say without hesitation that Trooper Coble exemplifies each one of them.

“He is very approachable and goes out of his way to bridge the gap between local law enforcement and the community.”

The appreciation ceremony is henceforth expected to be an annual event.

“It has been one of the most humbling experiences that I have done as a volunteer,” Giles County Youth Services Officer Pam Arnell said.

“They are putting their lives on the line for the rest of us,” sponsor Glen Newton said. “When you have a fire, people are running away from the fire while the firefighters are running in.

The top applicants from each category were selected by a committee based on points given for community service, professional career, heroism and letters of recognition, news clippings and other substantiating documentation.

“I want to thank you from the bottom of our hearts for what you do for us,” Steelman added.

“For all the applicants, we appreciate you,” Arnell said.