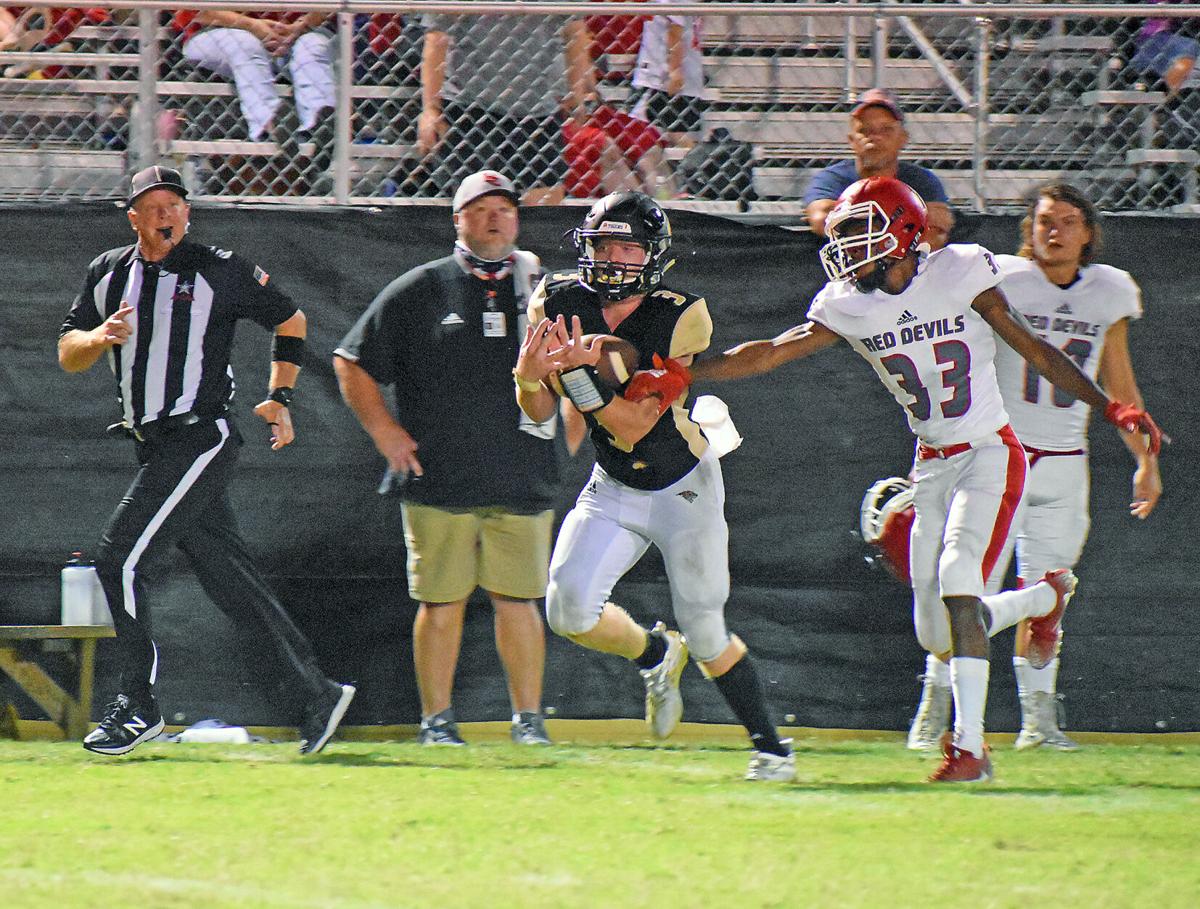 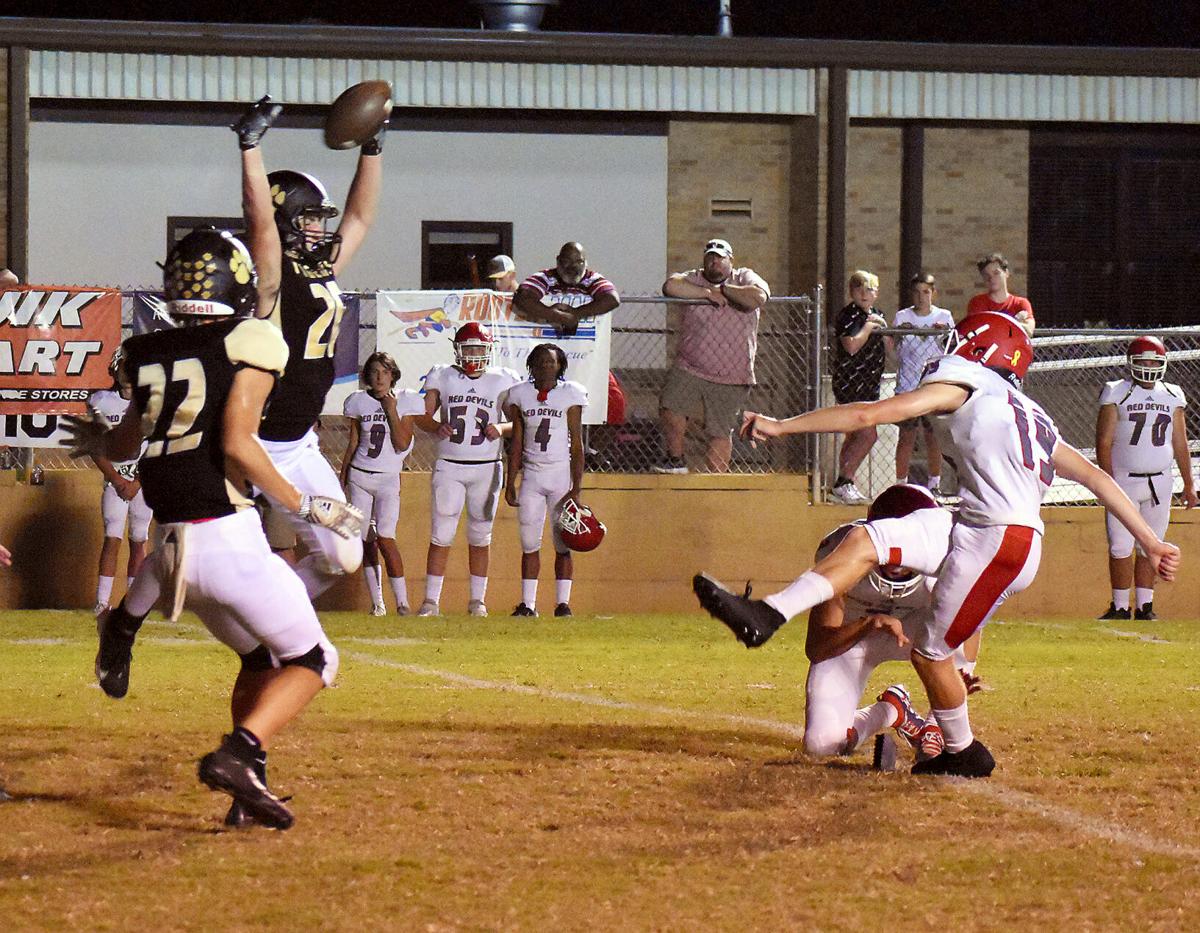 Seeking a 4-0 start on the season, the Ardmore Tigers ran into a buzz saw in the form of Lawrence County, Ala., falling to the Red Devils 41-21 on Homecoming at Cooper Field.

Both teams capitalized on their opponents’ early mistakes to end the first quarter tied 7-7.

Lawrence County got its first quarter score on an 80-yard touchdown pass on its first play from scrimmage.

Nathan Reyer’s fumble recovery and 40-yard return set the Tigers up for their first quarter score, which came on a six-yard run by Conner Harbin.

Ardmore’s offense seemed to stay behind the chains most of the night and could not move the ball consistently against the Red Devil defense.

At a key point in the first half, the Ardmore defense and penalties forced a Red Devil punt on fourth down and 35 from their own 29-yard line. Ardmore muffed the punt return to set up a Red Devil nine-play touchdown drive.

William Ricks broke through to block the extra point for Ardmore, keeping the Lawrence County lead at 13-7 with five minutes left in the first half. 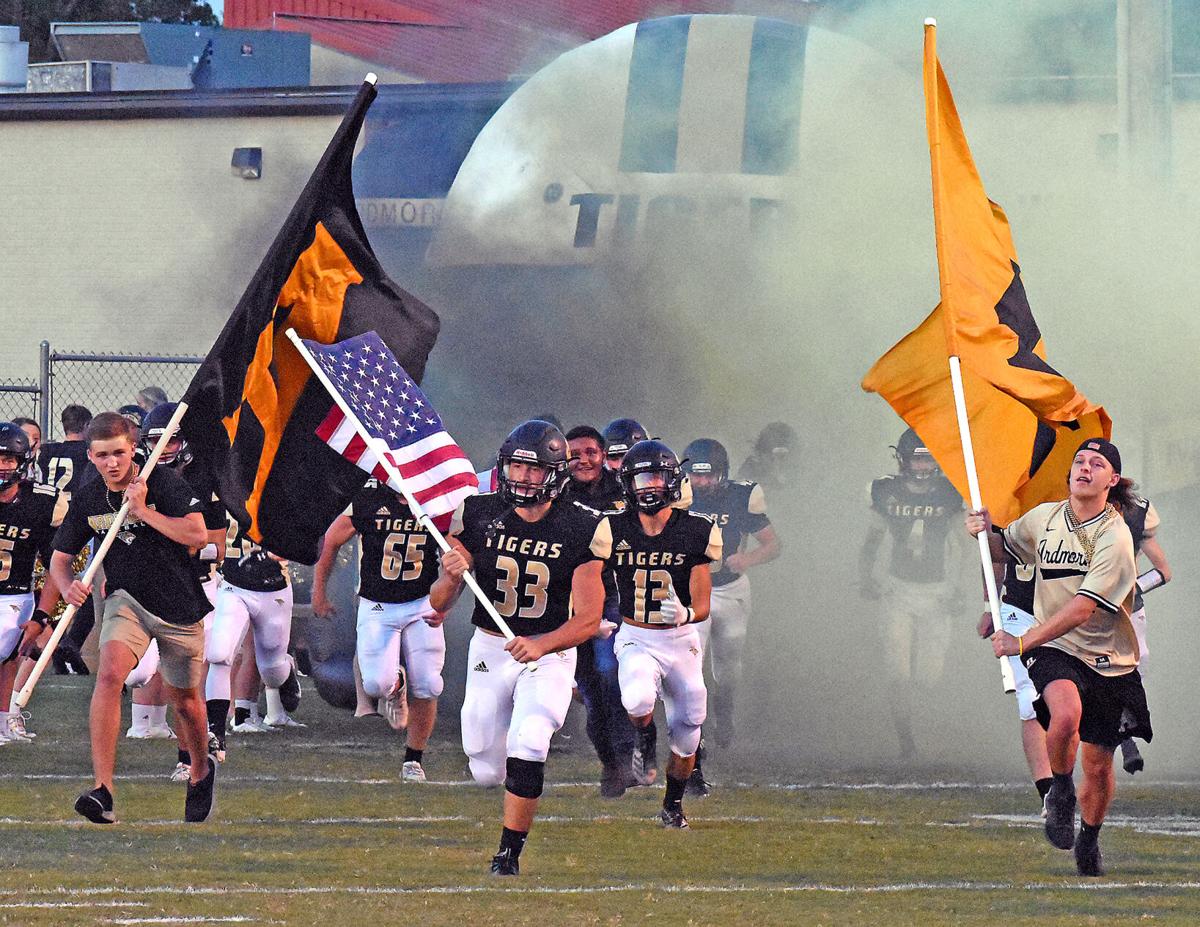 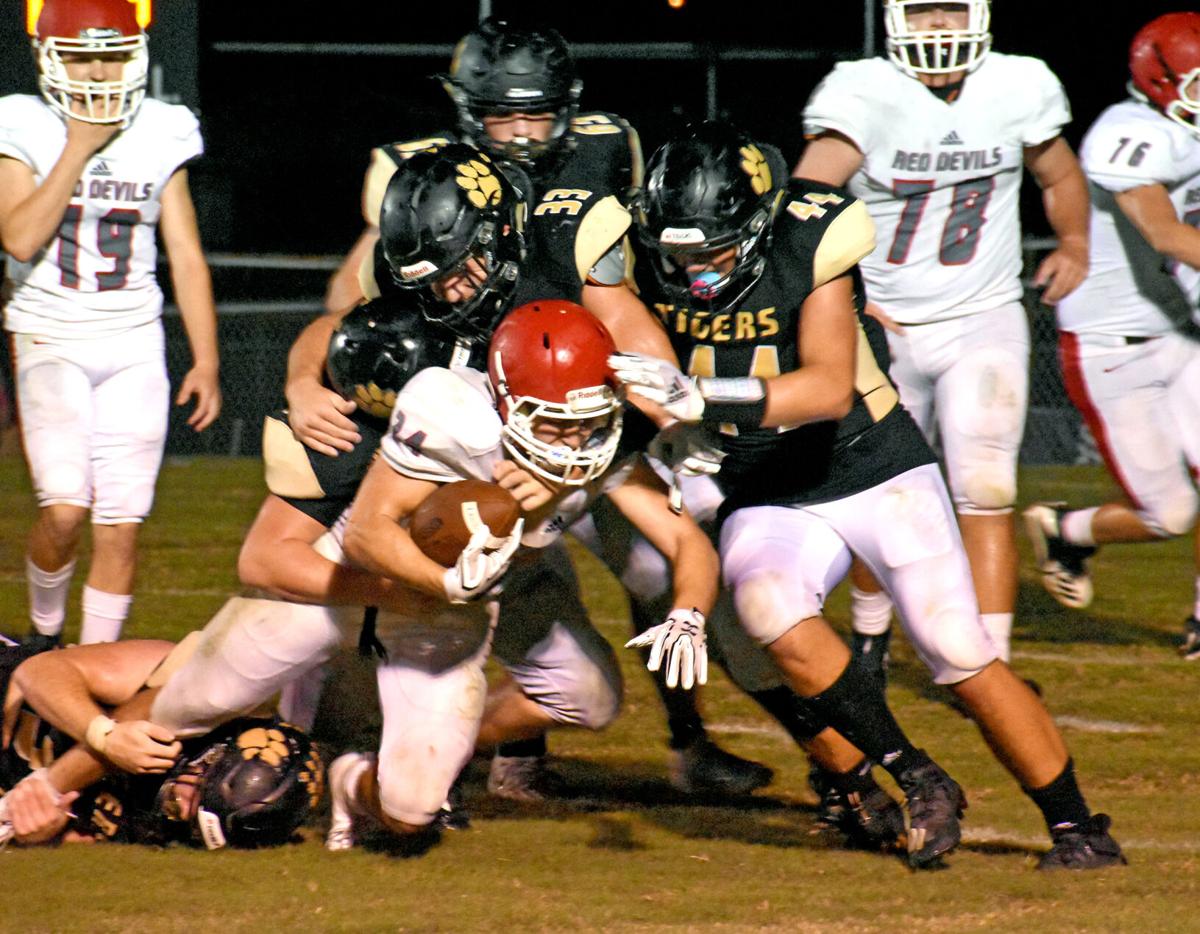 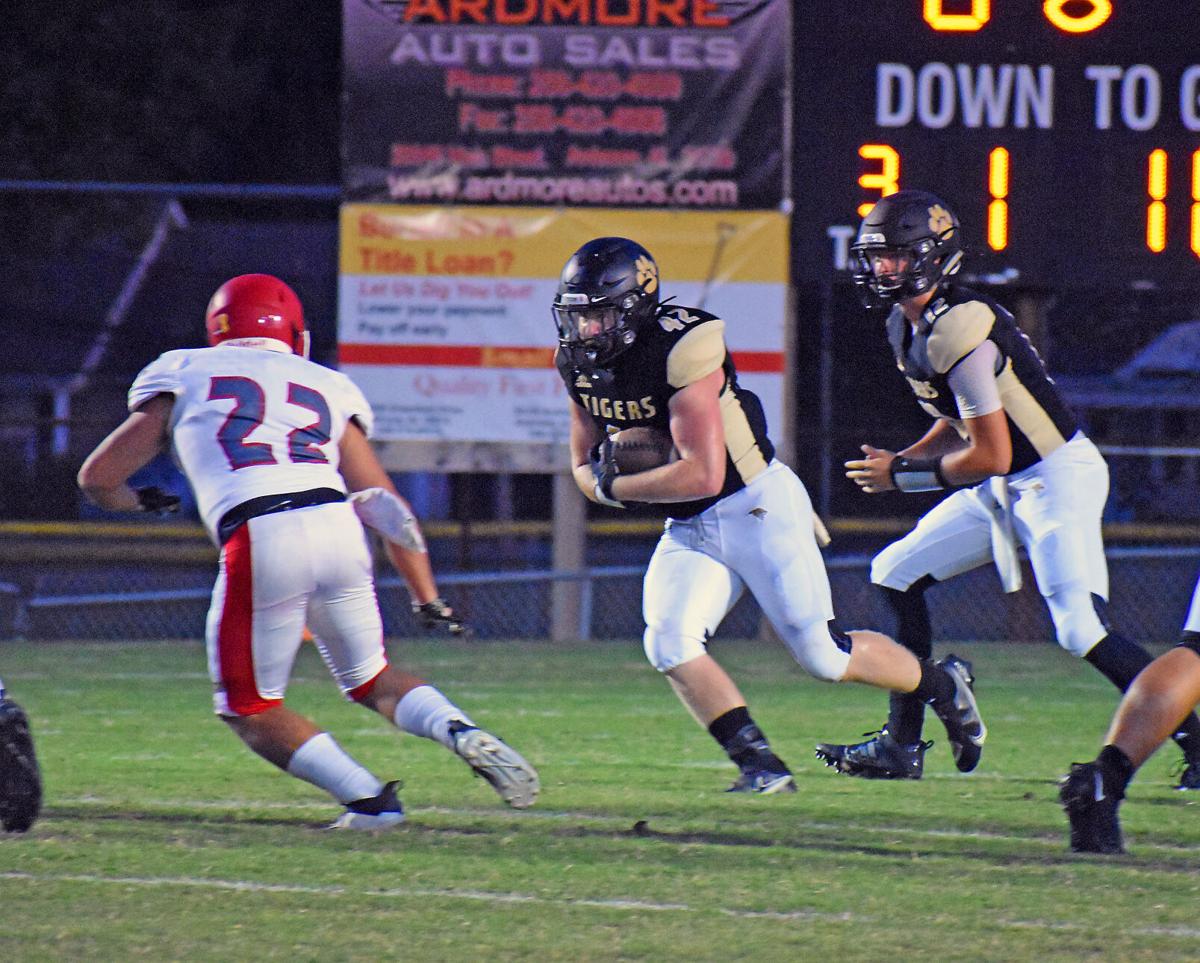 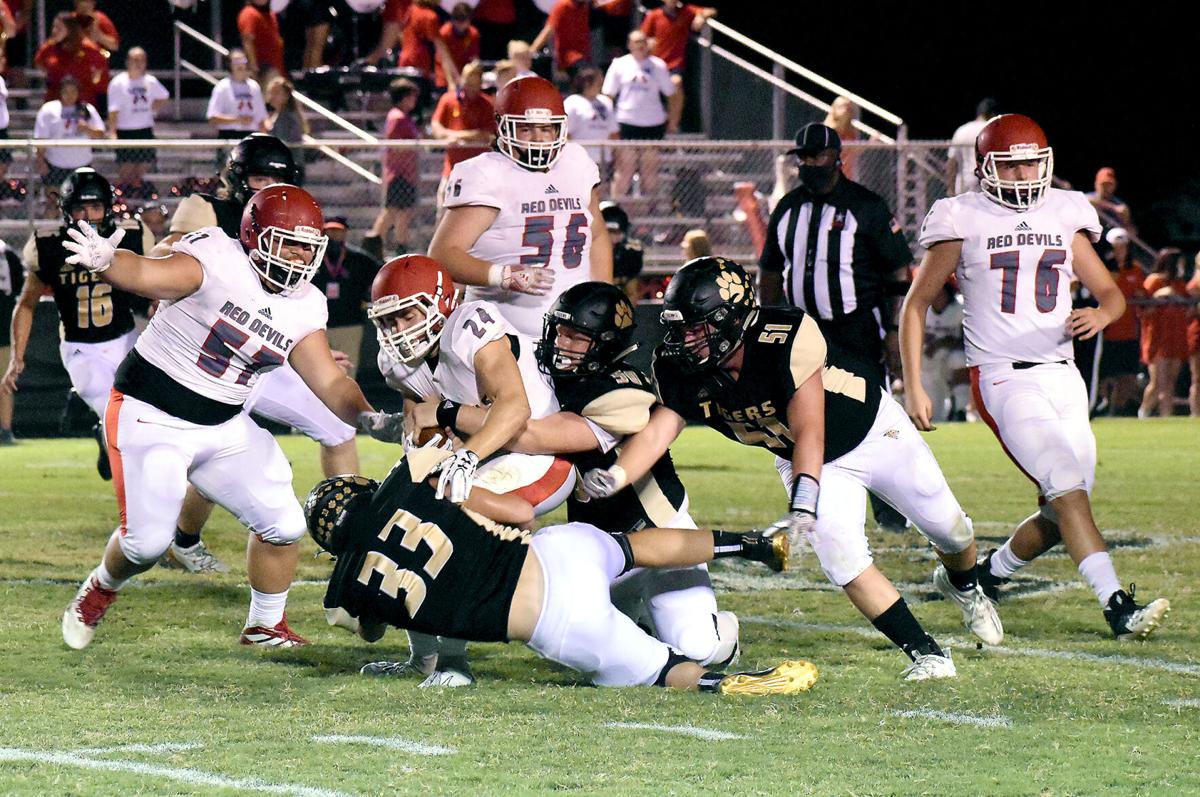 Lawrence County tacked on a 61-yard touchdown pass from Sparks to Benmichael Bennett to go up 20-14 with just 1:45 remaining in the game.

Ardmore countered with Chris Allen’s 70-yard kickoff return for a touchdown that cut the lead to 20-14 with 1:05 remaining in the first half.

Sparks and Bennett connected again for the Red Devils, this time for a 23-yard score to set the halftime score at 27-14.

While Ardmore’s offense continued to struggle to find its rhythm in the second half, the defense regrouped in the third quarter, holding Lawrence County scoreless led by big plays from Luke Hogan, Bryce Moore, Kaden Newton and Reyer.

However, the relentless speed of Lawrence County eventually led to two scores early in the fourth quarter for a 41-14 Red Devil lead.

Ardmore got its final score of the night when quarterback Owen Doss first hit Allen for 43 yards and later hit Cason Hodges for a 16-yard touchdown.

The Ardmore defense refused to give in late as Lawrence drove to a first-and-goal from the nine-yard line. The Red Devils attempted a field goal with just seconds remaining in the game, but Ardmore stopped the attempt, forcing a fumble to end the game.

“These kids are not going to give up,” Ardmore head coach P.J. Wright said. “They’re a very resilient bunch. We knew that going in. It’s going to be important how we bounce back during this open week and makeimprovements on the field.

Wright said his team needs the coming open week to heal and regroup from their first loss of the season.

Ardmore is 3-1 overall and 1-1 in region play heading into their bye week.

The Tigers are scheduled to take the field Sept. 25 at Clements. Kickoff is scheduled for 7 p.m.

When Big Ten football does return ... 10 Huskers who have fans buzzing

What's all this about '70 at 50'? A look at the Journal Star's history project on Nebraska's first title team

Rapid testing ensures 'a clean field,' and a ticket to a Big Ten football season