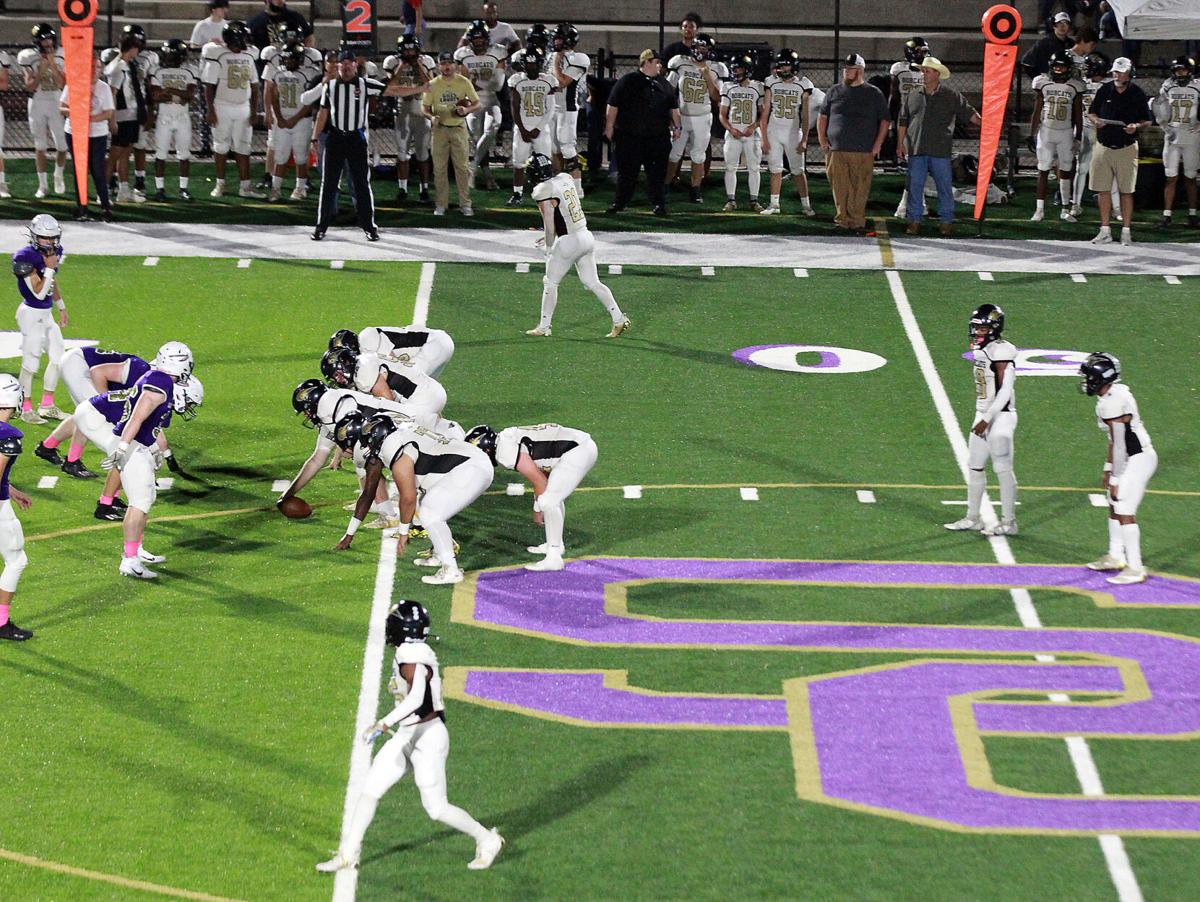 Kamauri Turner and X’Zorion Randolph line up in the backfield of the second quarter in Giles County’s win at Sequatchie County last Friday. 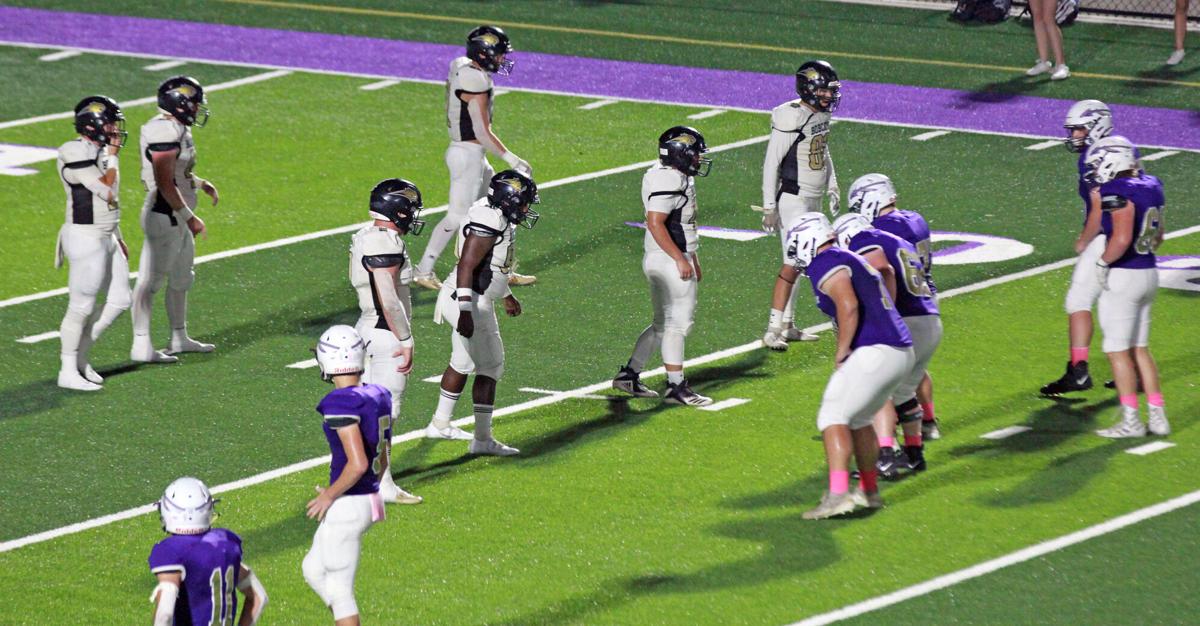 Giles County defenders line up to stop Sequatchie County during the second quarter of last Friday’s big victory. The shutout marked the first of the season for the Bobcat defense.  Wade Neely / Pulaski Citizen

Giles County scored touchdowns on all six of its first-half drives and tacked on two more in the second half to cruise to a 56-0 victory at Sequatchie County last Friday night.

The win kept the Bobcats (7-0, 3-0 Region 4-AAA) undefeated season in tact and clinched at least a share of the region title for the Bobcats — their first regular-season title since 2012.

The Bobcats were dominant from start to finish in the win, forcing four interceptions and turning the hometown Indians (4-4, 2-1) over on downs twice.

“This was a tremendous all-around effort from our team tonight,” Bobcats head coach David O’Connor said. “The final score won’t tell the whole story, but Sequatchie County is not a bad football team. Our kids came out and played their tails off from start to finish. I was proud of the way we executed in all three phases of the game.”

The ballgame got out of hand early, with the Bobcats marching 53 yards in less than three minutes for a score on their opening drive of the ballgame.

Senior running back Chaye McElroy capped the drive when he popped free on a 36-yard run for the opening score. After softening up the defense with three prior carriers, McElroy took a handoff over the right guard and found daylight in the secondary to scurry for the opening touchdown.

Giles County notched its first of four interceptions on its initial defensive drive, when Bryson Gordon corralled a pass popped into the air near midfield.

The Bobcats scored in short order, with sophomore spell back X’Zorion Randolph taking a third-and-one carry 42 yards to the endzone to push the lead to 14-0.

Sequatchie County mounted its best offensive drive of the ballgame, but saw an 11-play drive fizzle out near the redzone on a failed fourth down attempt.

The Bobcats struck quickly once again, with sophomore quarterback Kamauri Turner tossing a forward pass that resembled a sweep to sophomore Tyrick Brown, who scampered around the right-side edge and ran untouched for a 67-yard score early in the second quarter.

Ahead 21-0, the Bobcats again forced a turnover on downs, when the Indians fourth-and-three attempt fell incomplete.

The Bobcats struck for their second-quickest drive of the night, scoring in just four plays.

Taking over at their own nine-yard line, the Bobcats ran a dive with McElroy, who again broke free into the secondary, sprinting down the sideline before eventually being dragged down at the Indians 10.

The Bobcats scored just three plays later when defensive end-turned fullback Alden Staggs took in a two-yard tote to extend the lead to 28-0. The drive took just 1:05 off the clock for the Bobcats.

Ahead by four scores, the Bobcats added their fourth score of the half, this time on a 48-yard rush from Turner, which capped a two-play scoring drive.

The Bobcats intercepted the Indians once again, with sophomore defensive end Jesse Murray dropping back into coverage and snagging the errant throw from Indian signal-caller Payton Campbell.

The short field set up the Bobcats nicely, with Gordon rushing in for the touchdown. The score pushed the margin to 42-0 for the Bobcats, more than ensuring the necessary 35-point margin to enact a running clock in the second half.

“It was nice to see our guys come out and execute so well in the first half,” O’Connor said. “Our defense did a great job to just making Sequatchie County keep snapping the football and extend their drives. Eventually, they made a mistake and we were there to capitalize. We had really good balance on the offensive side of the ball, and we had a near-flawless half in special teams.”

The running clock would be a much-needed benefit for virtually everyone in attendance Friday, as heavy storms moving in from the west bore down on the crowd at Indians Field. The entire fourth quarter was played under driving rain, but lightning avoided the area and allowed the teams to finish the contest.

The Bobcats saw junior Trevon Dangerfield and freshman Kareem Bryant notch interceptions as part of second-half highlights on the defensive side of the ball.

Junior backup quarterback Eric Goodnight turned in an impressive second half, completing five passes for 52 yards and two touchdowns — one to senior Amarion Sizemore and the other to freshman DJ Gardner.

McElroy led the Bobcat offense with eight totes for 142 yards. As a team, the Bobcats ran the ball 25 times for 266 yards.

Seven different receivers made catches for the Bobcats, led by the aforementioned Gardner’s four grabs. The 131 yards passing as a team marked a season high for the Bobcats.

Defensively, the Bobcats were led by senior Matthew Gingerich, who made seven solo tackles and assisted on two more.

As a team, the Bobcats combined for seven tackles for loss, led by senior linebacker Sawyer Phillips with four. Staggs had the lone sack of the night for the Bobcat defense.

The Bobcats converted all eight kicks on the night, with senior backup kicker Austin Mayes adding the extra points on the final two scoring drives.

And while Friday’s victory did not ensure sole ownership of the Region 4 crown, the Bobcats will have a chance to do that in their final ballgame of the season when they travel to Woodbury to face Cannon County.

The Bobcats return to action this coming Friday versus another East Tennessee-based team when Class 6A Cleveland visits Sam Davis Park.

The Blue Raiders (5-3) started the year with five wins in six games, but have since dropped two in a row, including a 14-10 region loss to Knoxville Bearden last Friday.

“We have tried to put together a really tough schedule,” O’Connor said. “Any time you have a 6A football team coming to town, that’s a really big deal. When you factor in that Cleveland is a really tough team coming off two hard-fought losses, we will have our hands full. We hope we have a huge crowd to cheer us on at The Brickyard.”

Kickoff in this Friday’s contest is set for 7 p.m. at Sam Davis Park.