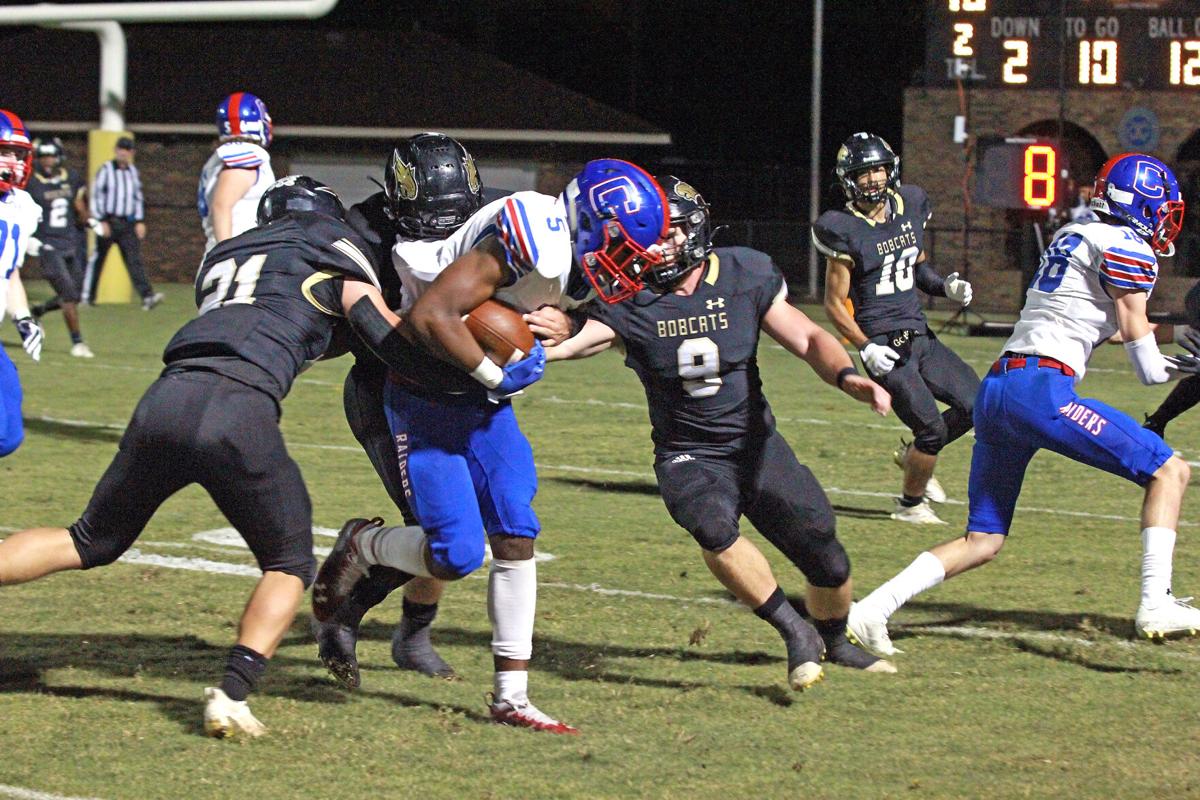 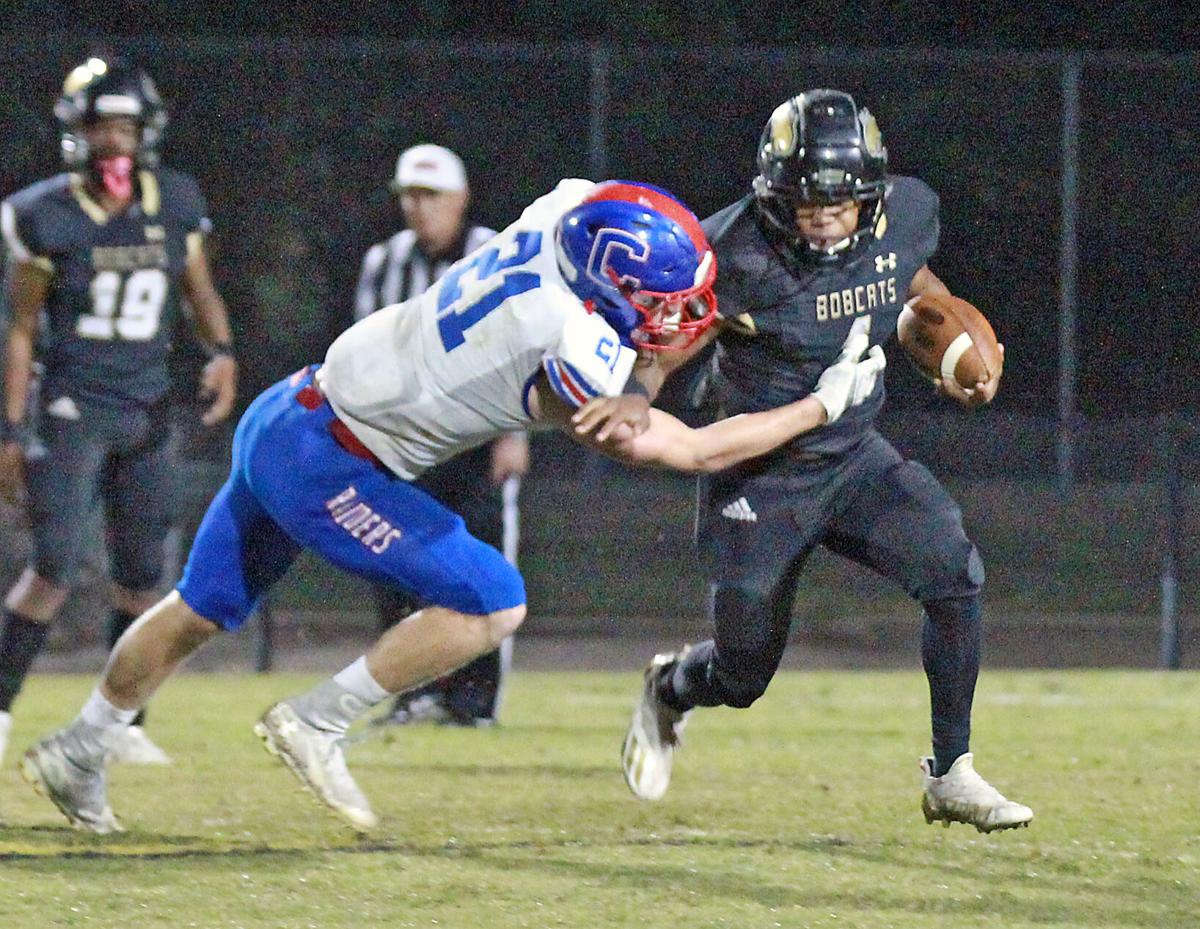 Bobcat running back X’zorion Randolph sheds a would-be tackler during the second half of last Friday’s win versus Cleveland.  Andrew Powell / Pulaski Citizen

Quarterback Kamauri Turner lines up the Bobcat offense in the second half of last Friday’s win versus Cleveland.   Andrew Powell / Pulaski Citizen

Chaye McElroy ran for four touchdowns and Giles County made just enough stops defensively to keep its undefeated season alive in a 33-20 victory versus Class 6A Cleveland Friday night at Sam Davis Park.

In their final home game of the regular season, the Class 3A Bobcats (8-0) jumped up three classifications to battle the Blue Raiders (5-4) for just the second time in school history.

“I am just really proud of our kids and the way we continue to improve each week,” Bobcats head coach David O’Connor said. “They had a big region win last week, and had a tremendous 6A team come to town tonight. I thought all three units showed up tonight, and I was especially proud of the way our defense held its own against an explosive offensive unit.”

Giles County never trailed in the contest, opening the scoring on a five-play, 57-yard drive, capped by the first of McElroy’s four touchdowns — this one from 30 yards out.

The Blue Raiders answered in short order — just two plays, in fact — when quarterback Drew Lambert uncorked a 79-yard bomb to Rodney Broadnax, Jr. to even the score at 7-7 less than four minutes into the contest.

The Bobcats had their longest offensive drive of the night on their ensuing possession, marching 61 yards on 11 plays, before settling for a 32-yard field goal from sophomore kicker Chase Cardin.

Ahead 10-7, the Bobcats saw the Blue Raiders march methodically down the field as well, before a 14-play drive ended with a redzone interception by sophomore defensive back Tyrick Brown.

The drive not only took the game into the second quarter, it seemingly appeared to take the momentum out of the Blue Raiders.

“I thought Tyrick’s interception was the biggest turning point in the ballgame,” O’Connor said. “Cleveland had us on the ropes defensively after that first drive, and were marching right there for another score. Tyrick did a great job of getting to the football first and making a play. That allowed us to get an extra possession and tack on some points.”

The Bobcats mounted another lengthy drive, this time covering 84 yards in seven plays and capping it with McElroy’s second touchdown — this one from a fullback position.

Ahead 17-7, the game continued to spiral away from the Blue Raiders, with a high snap on their first punt attempt of the night sailing into the endzone and recovered for a safety.

Now leading 19-7, the Bobcats tacked on another McElroy touchdown with just 1:53 left in the half, pushing the edge to 26-7.

The Blue Raiders seemingly appeared as if they would be in danger of giving the ball back to the Bobcats once more, but running back Tetoe Boyd picked up 16 yards on a 2nd-and-20 situation, and then rushed for five more, giving them a much-needed first down.

Lambert continued to throw the football on the drive, throwing six more passes and converting the last one on a fourth down inside the redzone on an 11-yard strike to wideout Mycah Jordan as time virtually expired in the half.

Leading 26-14 at the break, the Bobcats posted a crucial three-and-out defensively to start the second half, with McElroy converting the ensuing offensive possession into the final points of the night for the Bobcats on a two-yard tote.

Leading 33-14, the Bobcats forced a turnover on downs and another Blue Raider punt to effectively put the game away.

Cleveland notched a late touchdown when Lambert found Broadnax again — this time from eight yards out, with just 4:27 left in the ballgame.

Giles County milked the clock before punting back to the Blue Raiders, who failed to further trim into the Bobcat lead.

“It’s not very often you get a chance to play a team as good as Cleveland this late in the year,” O’Connor said. “Coach (Marty Wheeler) has a good track record wherever he goes and he had this Cleveland team rolling earlier this year before a few tough losses. This was a perfect test for both of our teams at this juncture in the season right before playoffs.”

McElroy stole the show offensively for the Bobcats, rushing 20 times for 158 yards and the four touchdowns, giving the senior 16 rushing scores on the year, which matches his single-season career high of 16 set in 2019.

The four scores are the second time McElroy has gone in for four touchdowns this season, with the senior also scoring four times in a win versus Franklin County earlier this season. The effort marked a fourth time in seven games McElroy has eclipsed 100-plus yards rushing.

Sophomore spell back X’Zorion Randolph did not find the endzone, but continued to be a much-needed change of pace in the backfield for the Bobcats. Randolph ran 12 times for 88 yards.

As a team, the Bobcats ran for 274 yards and racked up 385 yards of total offense.

“I really like the setup we have with Chaye and (Randolph) back there. They compliment each other so well. Chaye is such a bruiser and can go every snap if you need him too, but X has that extra burst to get to the next level in a hurry. We even had them both in there for a few plays at times tonight.”

Sophomore quarterback Kamauri Turner continued to develop for the Bobcats, completing 7-of-10 passes for 111 yards.

Four of Turner’s passes ended up in the hands of senior playmaker Amarion Sizemore, who hauled in four catches for 112 years, including a dramatic, over-the-shoulder catch in the second quarter.

Defensively, the Bobcats were led by senior Jason Rose, who posted eight solo tackles and assisted on four others. Senior defensive end Alden Staggs transitioned to middle linebacker and made five solo stops on the night. Sophomore Jesse Murray notched the lone sack of the night for the Bobcats, who saw their opponents throw 30-plus pass attempts.

In addition to his interception, Brown also forced a fumble, which was recovered by senior defensive end Jacob Durham.

“I thought the defense played pretty solid at times tonight,” O’Connor said. “Cleveland is without a top receiver due to injury, but they still have a really explosive offense. We were fortunate enough to get some takeaways and keep (Cleveland’s offense) on the sideline. That allowed us to build up a little lead and keep them at bay.”

The win kept the Bobcats undefeated this season, marking its longest unbeaten stretch since going 10-0 in the regular season and 13-1 overall in 2012. The Bobcats are now one of just two remaining unbeaten squads in Class 3A, joining fellow 8-0 Dyersburg. Top-ranked Alcoa suffered its lone loss versus 6A powerhouse Maryville earlier this year, while previously undefeated Loudon lost its first game last Friday, 31-21, at McMinn County.

Giles County returns to Region 4-AAA action this coming Friday, needing a win at Cannon County to sew up the outright regular-season crown. Cannon County (6-3, 2-0) has rattled off three straight wins, including a 56-30 region victory versus Community on Oct. 15.

Kickoff in Friday’s contest is set for 7 p.m. in Woodbury.