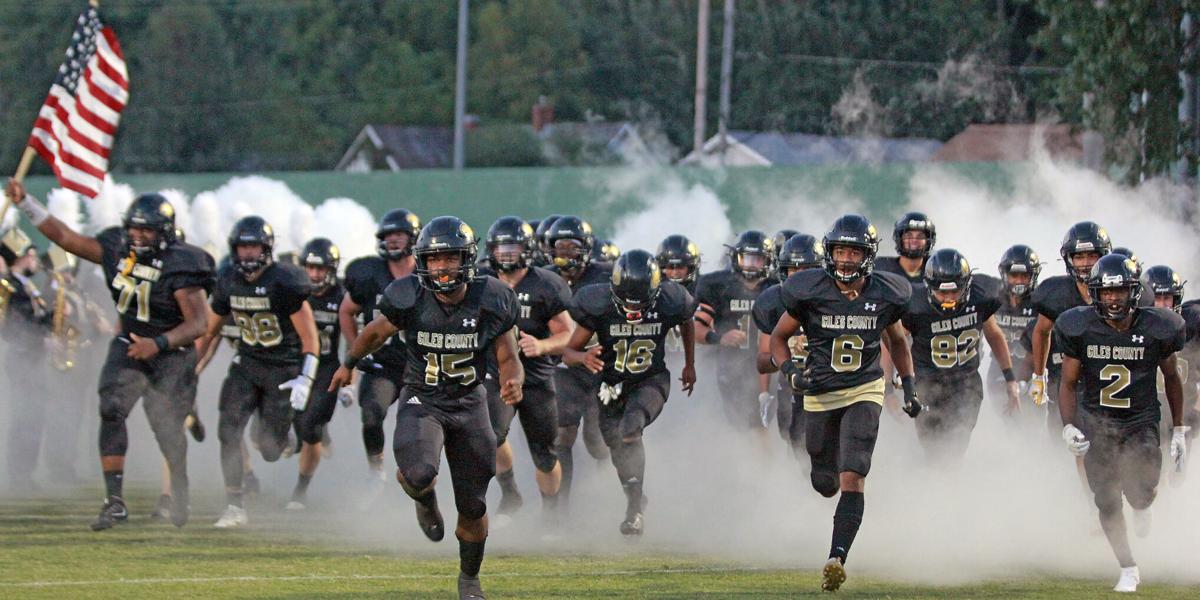 The Bobcats race onto the field and out to an early lead with three-straight scoring drives against Columbia Central Friday night. The Bobcats picked up a 42-13 win in the non-region contest.   Mark Mize / Pulaski Citizen 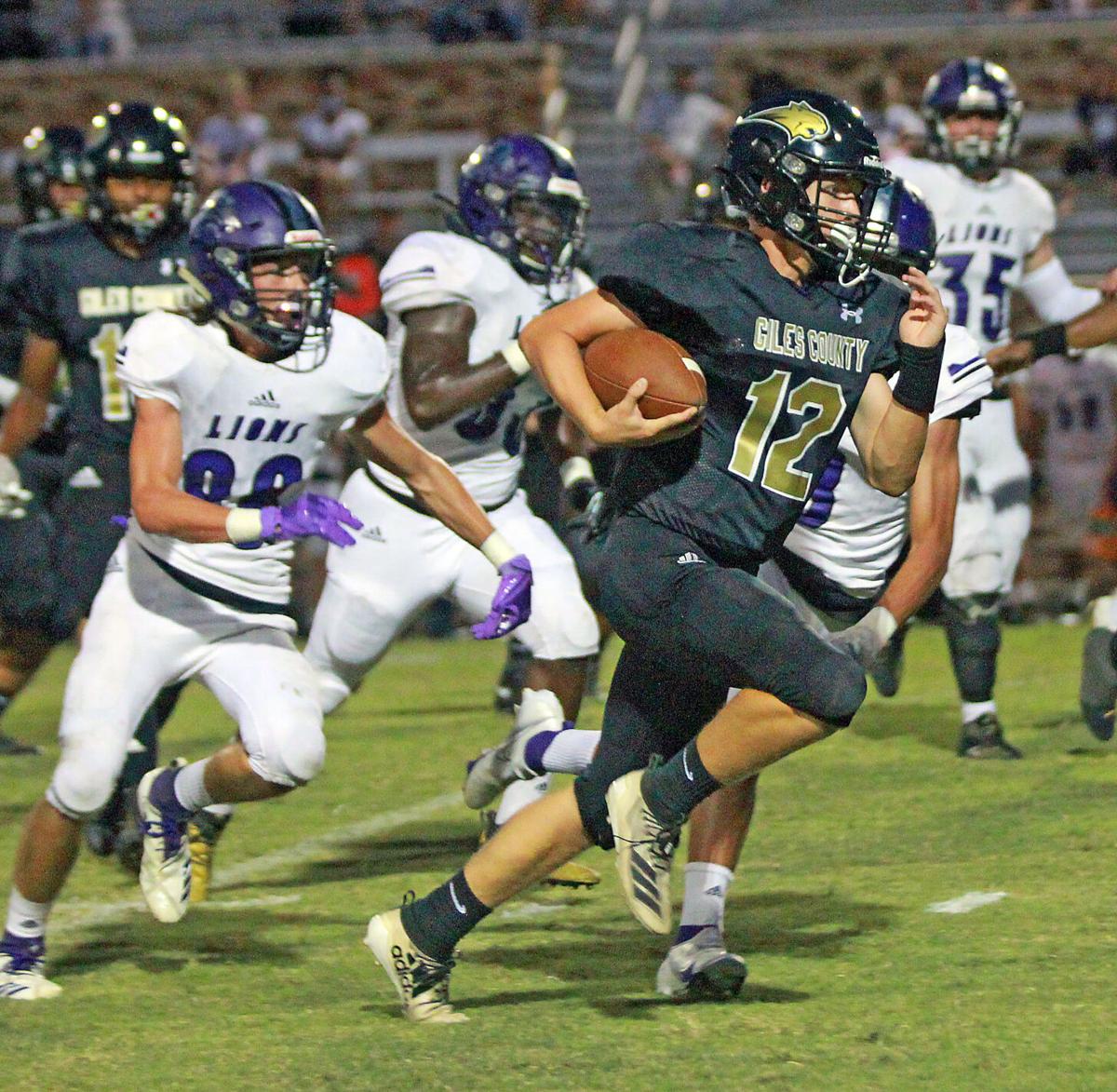 Quarterback Riley Cardin sprints around the outside after faking the handoff to his running back on the play.   Mark Mize / Pulaski Citizen 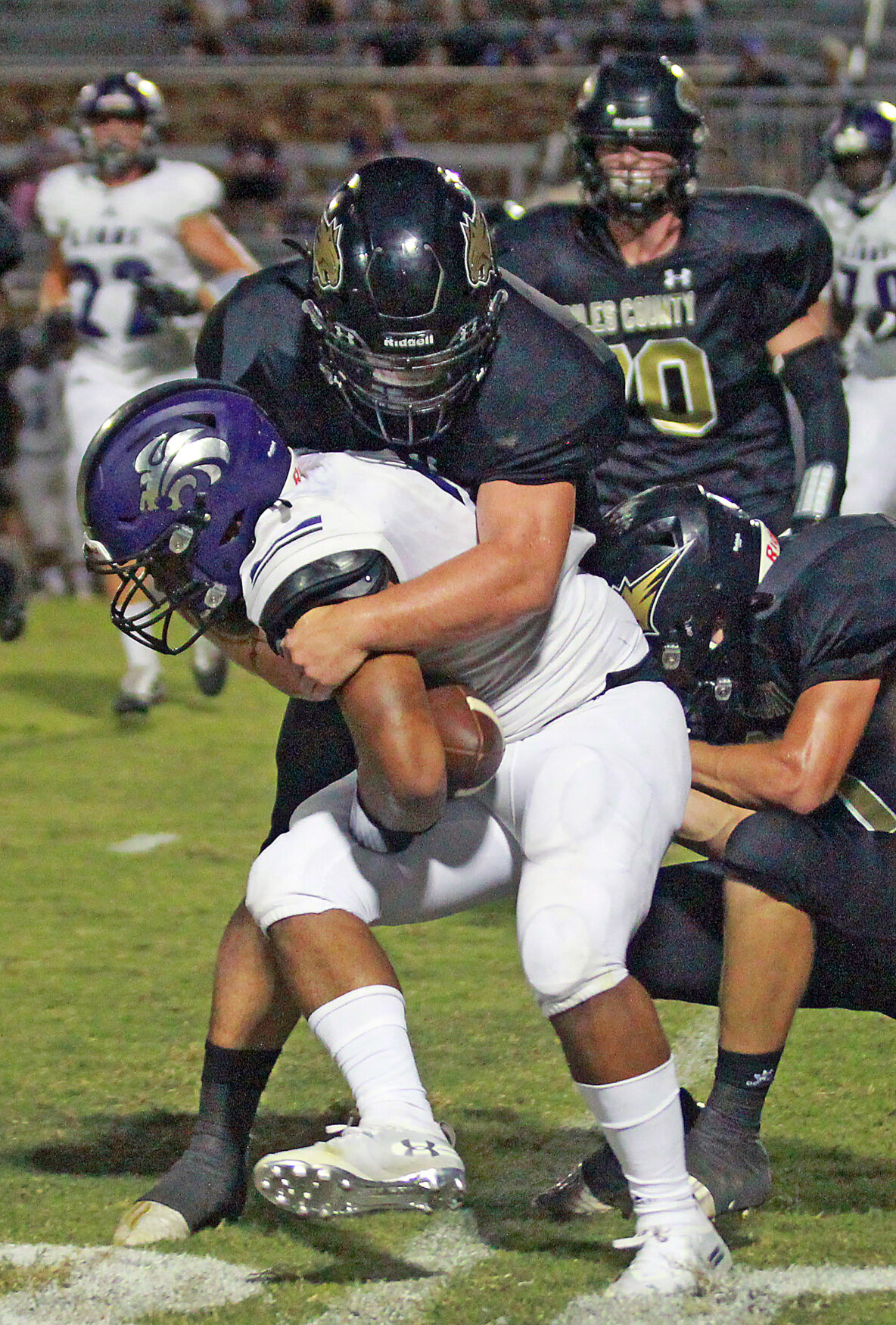 A strong night from junior running back Chaye McElroy led to a relatively one-sided victory for the Bobcats (1-2) versus the Lions (2-2).

With COVID-19 guidelines forcing schedule modifications almost on a weekly basis, this was a game that was not originally scheduled to be played on a warm September night at Sam Davis Park.

But when Giles County and Columbia both needed Week 4 contests due to contests with Metro Nashville Public Schools, the two sides came together relatively quickly to schedule Friday’s contest.

“It was just one of those deals where we needed a game and they needed a game,” Bobcats head coach David O’Connor said. “Coach (Jason) Hoath and his staff did a great job of helping us pull off a game on short notice. We were just glad to finally be back out here competing on a Friday night after having our schedule kind of messed up the last few weeks.”

Despite not playing a full game since Aug. 21’s opening-night loss to Lincoln County (Giles County’s Week 2 contest at Hendersonville was postponed due to weather just before halftime), the Bobcats took control of Friday’s contest early, scoring on their first three offensive series.

But despite the offensive success, special teams played a major role in the Bobcat victory as Columbia had an opening possession end in a blocked field goal, and Giles County recovered an onside kick after their opening score.

“We caught two huge breaks early in the game with the special teams playing lights out,” O’Connor said. “We got in there and blocked that opening field goal and went down and scored. I think recovering that onside kick afterward was what really gave us the confidence and momentum to kind of really take control of the game.”

Columbia Central threatened to get back in the ballgame, however, as senior quarterback Brady McCanless found fellow senior wideout Steven Kinnard on a 30-yard strike just over two minutes before halftime.

Ahead 21-6 at the break, the Bobcats went three-and-out on its opening possession of the second half, leaving the door open for a potential Lion comeback.

But a strong punt pinned the Lions near their own end zone and forced Columbia to give Giles County the ball back in quality field position.

From there, J.C. Brown got involved for the Bobcats, carrying the ball in for a 12-yard rushing score that pushed the lead to 28-6.

The Bobcats added another McElroy touchdown, his third of the night, early in the fourth quarter to essentially put the contest out of reach. McElroy ended with 23 carries for 171 yards.

“It was good to just go out and play and get a win for our team and the fans,” McElroy said. “I felt like the offensive line really stepped up and did a great job tonight. The whole offense was really clicking, and we just fed off the momentum.”

Columbia Central senior running back Justin Buchmann added the final score of the night for the Lions midway through the third.

Giles County closed the scoring midway through the fourth quarter when sophomore quarterback Riley Cardin launched a deep ball to a streaking Amarion Sizemore for a 49-yard touchdown.

“It was good to see some of our young and upcoming playmakers step up to the challenge tonight,” O’Connor said. “Our young quarterback really wants to start to emerge as a leader, and I think tonight he took steps in the right direction. I thought our defense played well and got some key stops when we needed them. Tonight was just a great night of football in front of two really good crowds.”

With Metro Nashville Public Schools – which comprises all of Giles County’s Region 5-AAA opponents – still delaying the start of the season, Giles County must now turn to another familiar opponent in archrival Marshall County for a game.

Already scheduled for a game in Pulaski later this year, Giles County will now travel to Lewisburg next Friday for a rarely seen regular-season doubleheader.

“You know this has been a weird year to say the least,” O’Connor said. “But Marshall County needed another game and we are in such an interesting position with our region. We want to keep playing as much as we can. If that means playing your rival twice, sometimes that is what you have got to do.” 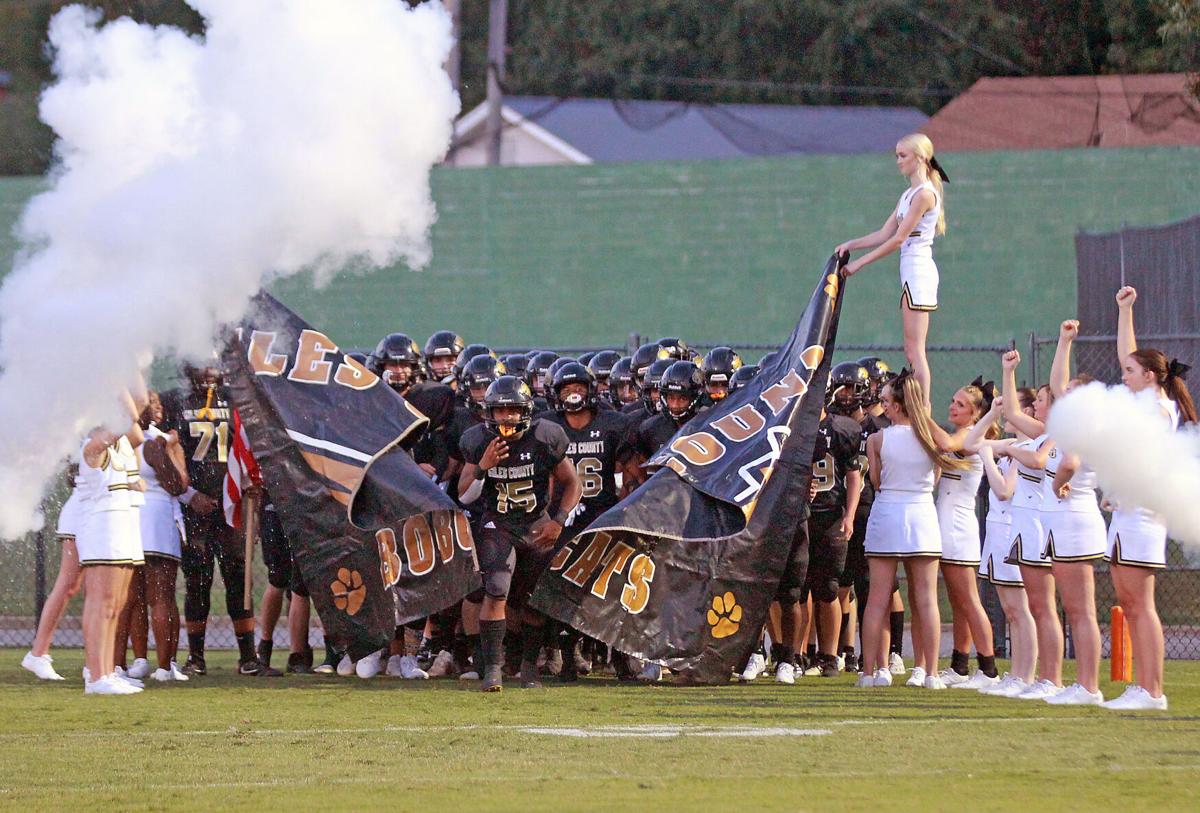 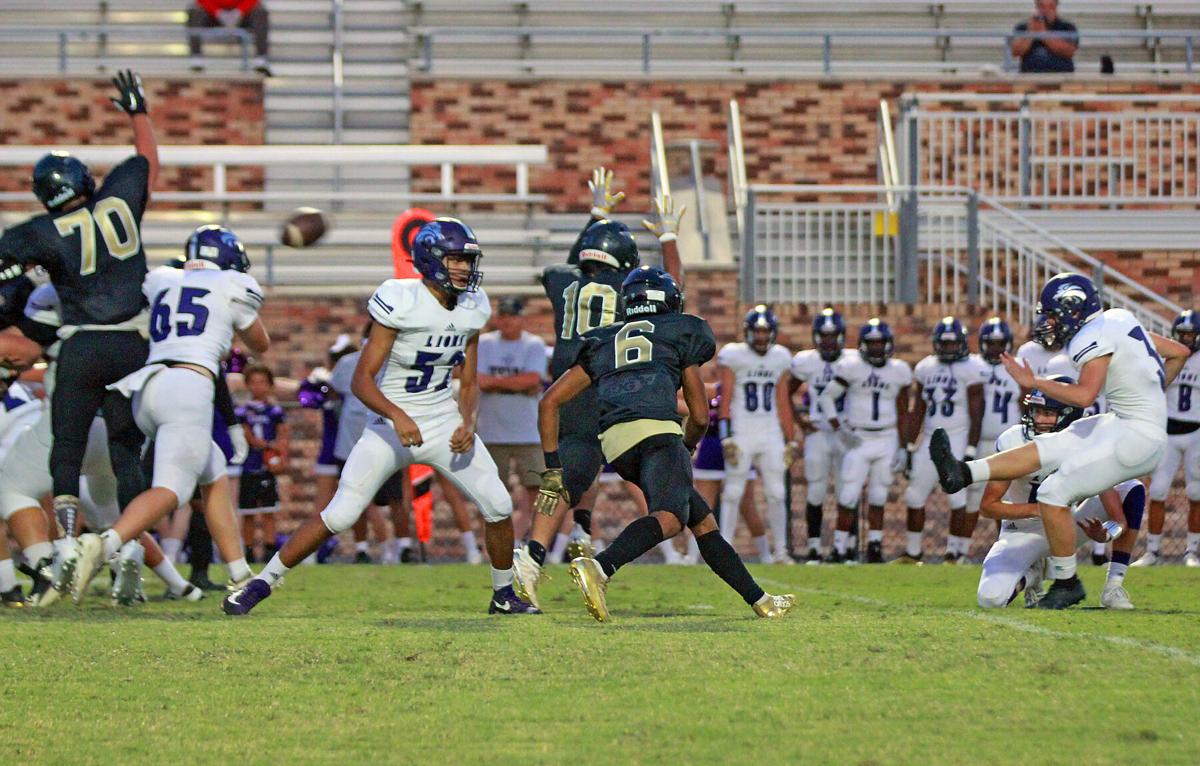 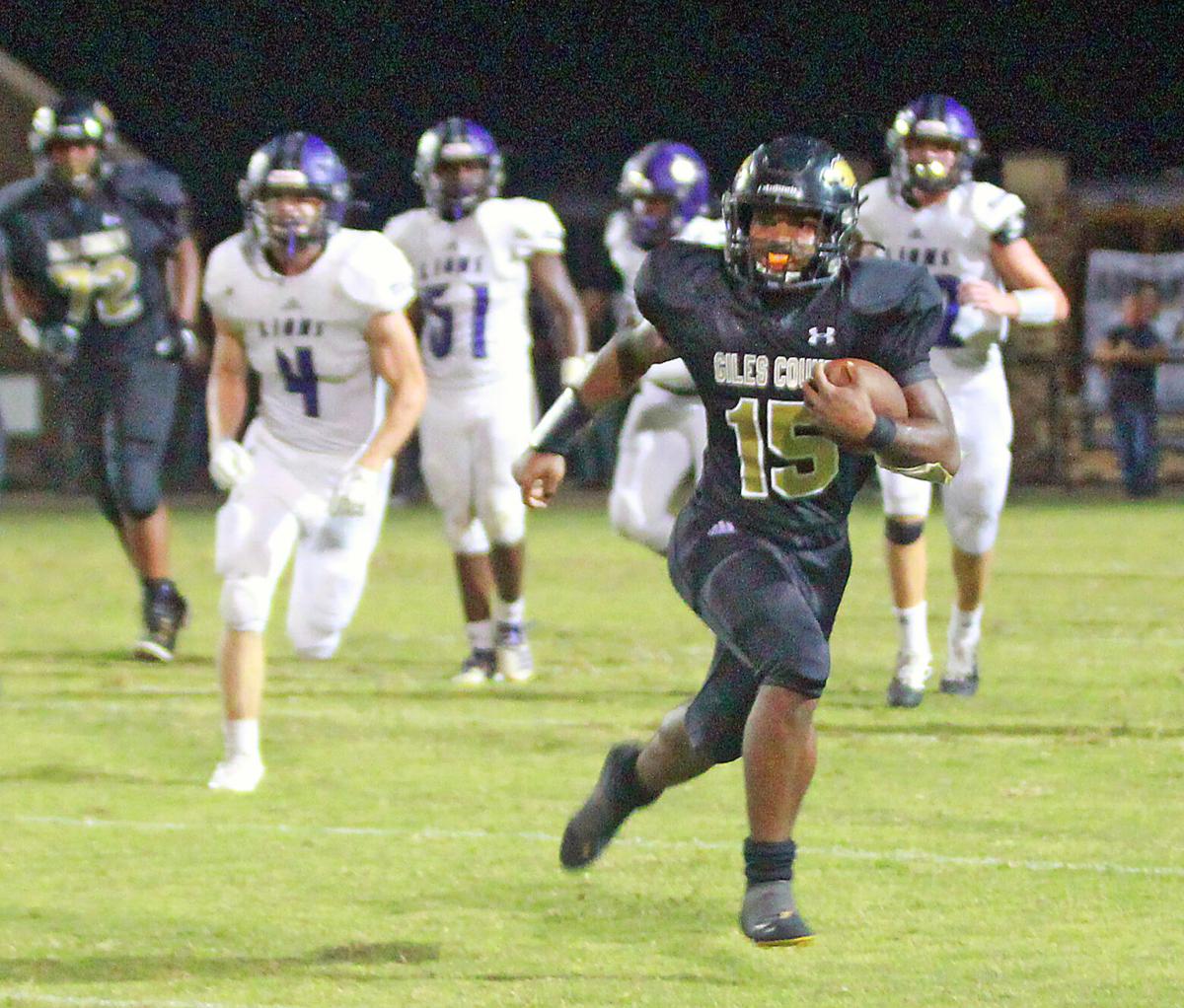 Yes, the Mountain West is looking into eight-game football season. But will it actually happen?