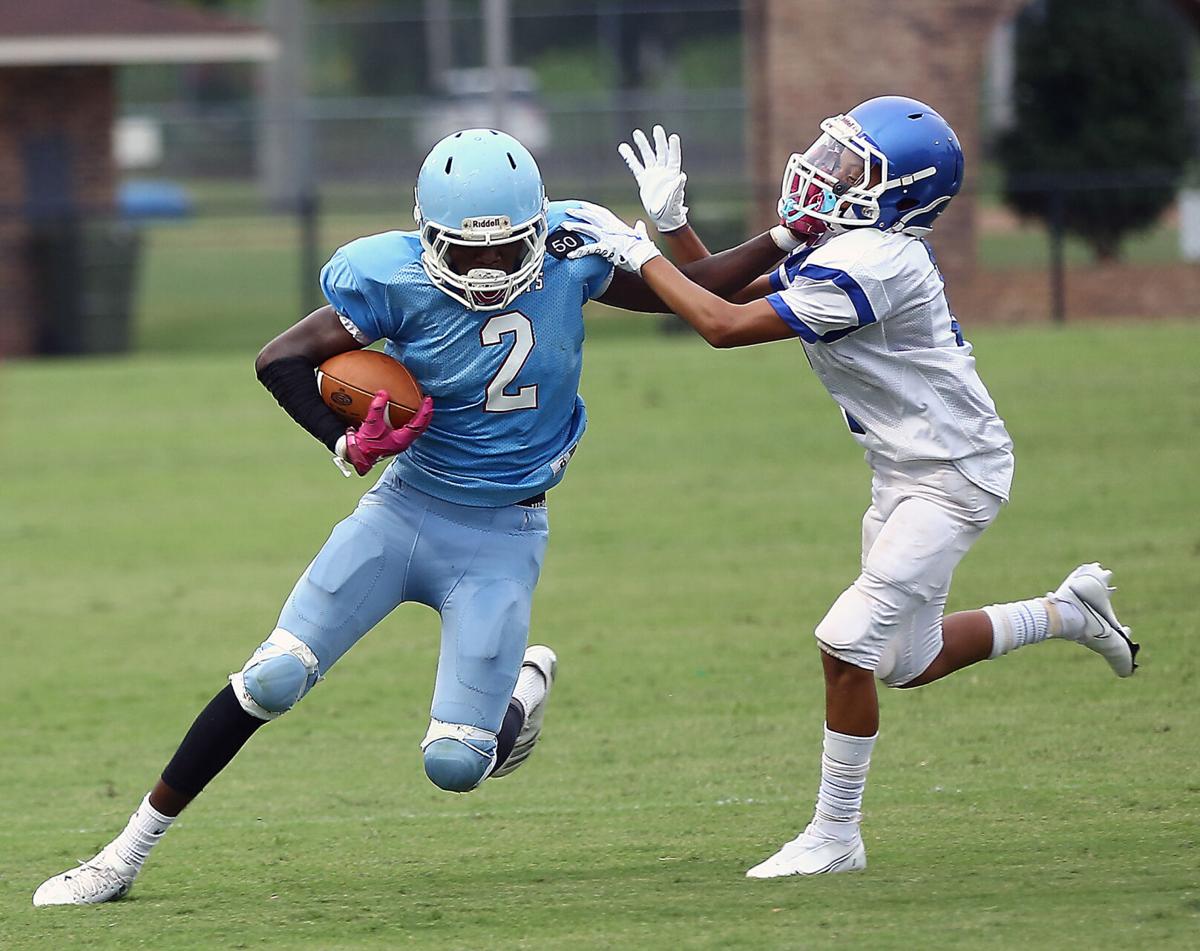 Kareem Bryant fights off a potential tackler in a conference game earlier this season against Lewisburg.   Ron Mayes / Pulaski Citizen 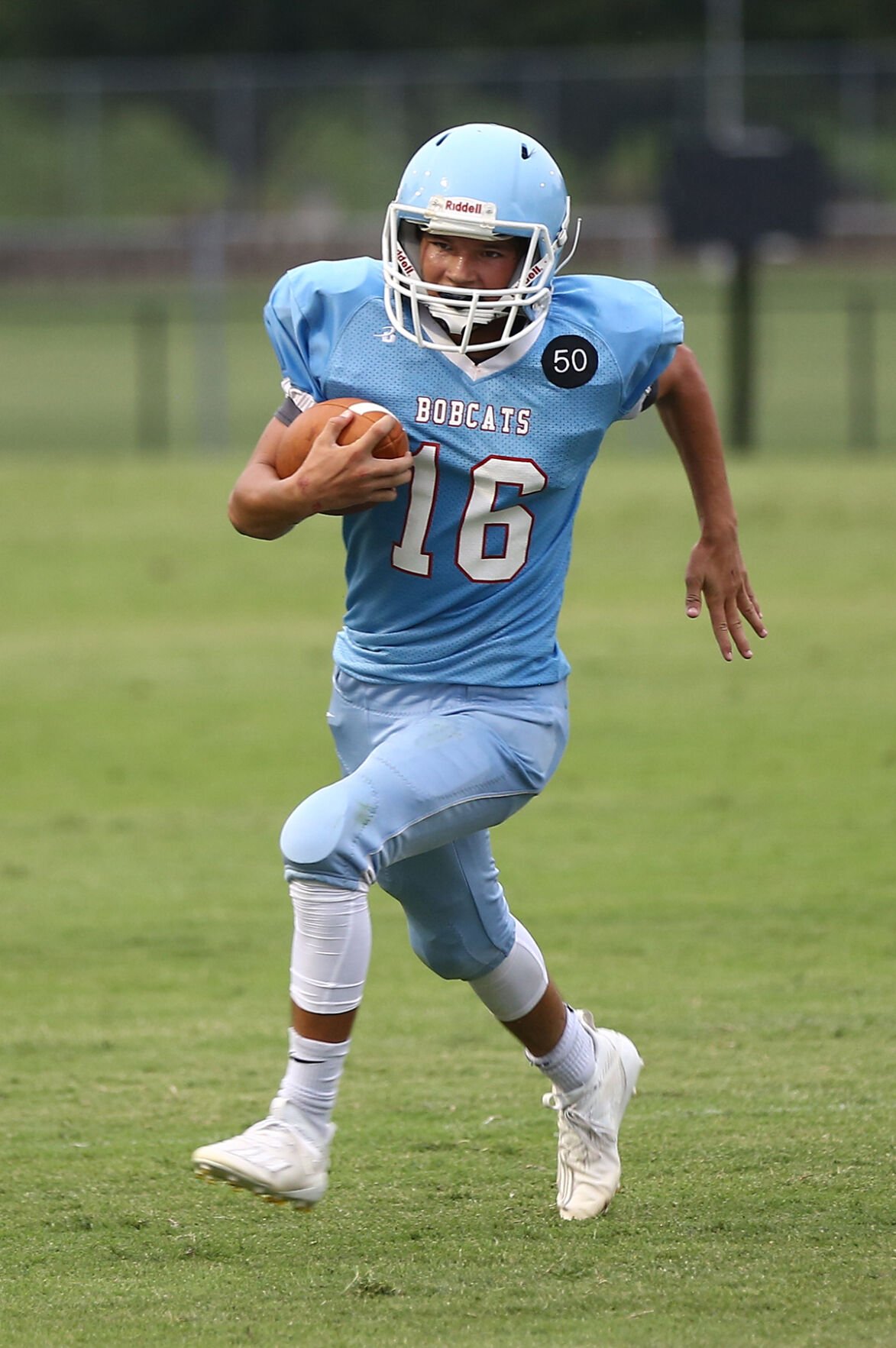 Lucas Laxson breaks a run to the outside at Sam Davis Stadium in the team’s first conference outing against Lewisburg. Bridgeforth is now 1-1 after Laxson threw two touchdowns in last week’s win over Whitthorne.   Ron Mayes / Pulaski Citizen

Bridgeforth spread the ball around offensively, getting touches to six different players in a variety of offensive sets. D.J. Gardner led the way with 136 all-purpose yards and two touchdowns.

Bridgeforth head coach Bryan Hollister said his team did a good job of controlling turnovers, which was a major factor in the Bobcats’ loss to Lewisburg two weeks ago.

“We still have some more adjustments to make in some areas, but that’s nothing to be surprised about,” Hollister said. “It was a huge win for the program; put us back on track for an appearance in the postseason.”The Bobcats started the game with an eight-play drive that ended on downs at the Whitthorne 28-yard line.

The Tigers struck quickly with a 59-yard run by Tyler Davis and a two-point conversion that put WMS up 8-0 with 1:50 left in the first quarter.

Bridgeforth’s next possession ended on downs near midfield, but the Bobcat defense stopped Whitthorne on downs as well and BMS took over at their opponent’s 45-yard line.

Seven plays later, Lucas Laxson dove in from the one-yard line after Gardner had set the Bobcats up inside the five with a 25-yard run.

With the two-point conversion, the game was tied 8-8 and remained tied at halftime.

The Bobcats successfully recovered an onside kick to start the second half and drove to the Whitthorne 24-yard line before a penalty set them up with fourth down and 16 at the 36. Laxson stepped in as quarterback and launched a pass to Gardner who made the catch and broke free for a 36-yard score. The two-point conversion was no good.

BMS executed a second-straight onside kick, only to go backwards on three plays.

Facing fourth down and 20 at their own 49, Laxson took the snap again, hitting Kareem Bryant across the middle of the field. Bryant outran the defense for the 51-yard score and ran in the two-point conversion to put the Bobcats up 22-8 with 3:46 left in the third quarter.

The Tigers answered with a five-play drive that ended with a 38-yard touchdown run by Jack Beck. The two-point conversion cut the Bridgeforth lead to 22-16 with 23 seconds left in the third quarter.

Starting at the WMS 40, Bridgeforth ran 10 plays that ended on downs at the 15-yard line. Included in the drive was a Bryant 24-yard touchdown run that was called back due to a penalty.

The BMS drive forced Whitthorne to drive 80 yards with 3:07 remaining to tie the game and potentially take the lead.

Taking advantage of big plays and a pass interference penalty, the Tigers drove the ball to the Bridgeforth 13 where Carson Tice hit Richard Powers in the end zone for the tying score.

Needing a stop to keep the game tied, the Bridgeforth defense stiffened and stopped the two-point conversion attempt.

“We made some adjustments on defense that really made a big difference in shutting down the run and controlling things on the outside,” Hollister said. “Our front five buckled down in crunch time and delivered a big blow that got kept Whitthorne out of the end zone and put us in the end zone.”

Gardner got Bridgeforth down to the WMS 25-yard line on a first down run, but time stopped the Bobcats in regulation.

Overtime rules in middle school gives each offense the opportunity to score from the 10-yard line. The game ends when one team scores and the other doesn’t.

Bridgeforth won the overtime coin toss and Gardner wasted no time scoring on a 10-yard run on the first play of overtime. Gardner added the two-point conversion run to put his team up 30-22.

From there, it was the BMS defense that sealed the game, holding Whitthorne to negative yardage on four plays, sealing the overtime win.

Gardner led Bridgeforth in rushing with 15 carries for 96 yards and touchdown. Bryant carried six times for 25 yards, and Laxson carried seven times for 22 yards and a touchdown. Pierson Collier, Smith Collier and C.J. Barr combined for five carries and 10 yards for Bridgeforth.

Laxson was the top passer for the Bobcats, hitting on 2-of-5 passes for 87 yards, two touchdowns and two interceptions. Gardner added one pass completion for six yards.

Bryant led the team in receiving with his 51-yard touchdown catch. Gardner had one catch for 36 yards and a touchdown. Laxson had a six-yard reception.

The win gives Bridgeforth a 1-1 record overall and in Big South Conference play.

The Bobcats take on another conference opponent when they travel to Spring Hill Sept. 10. Kickoff is scheduled for 6 p.m.

Despite strong offensive start, Packers know drops have resulted in ‘a lot of yards left out on the field’

Driving for 6: Football on the mind (and schedule); Fidone's hot start; one bit of schedule normalcy