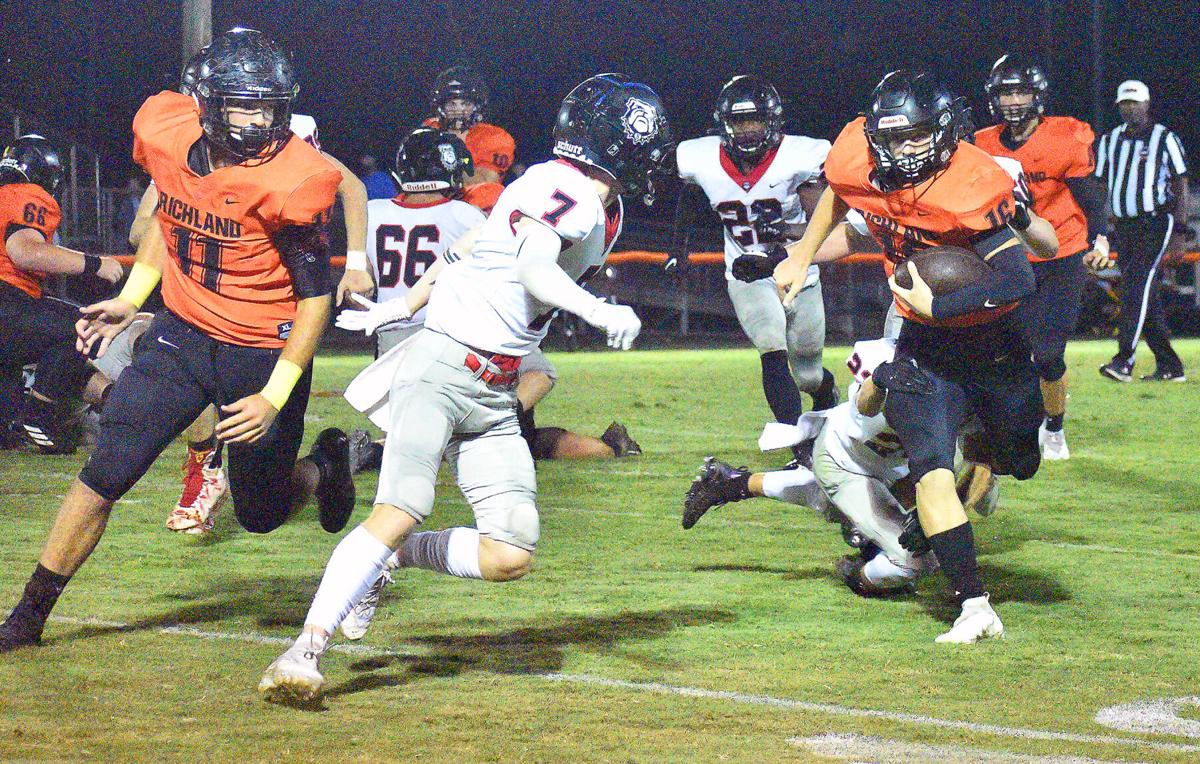 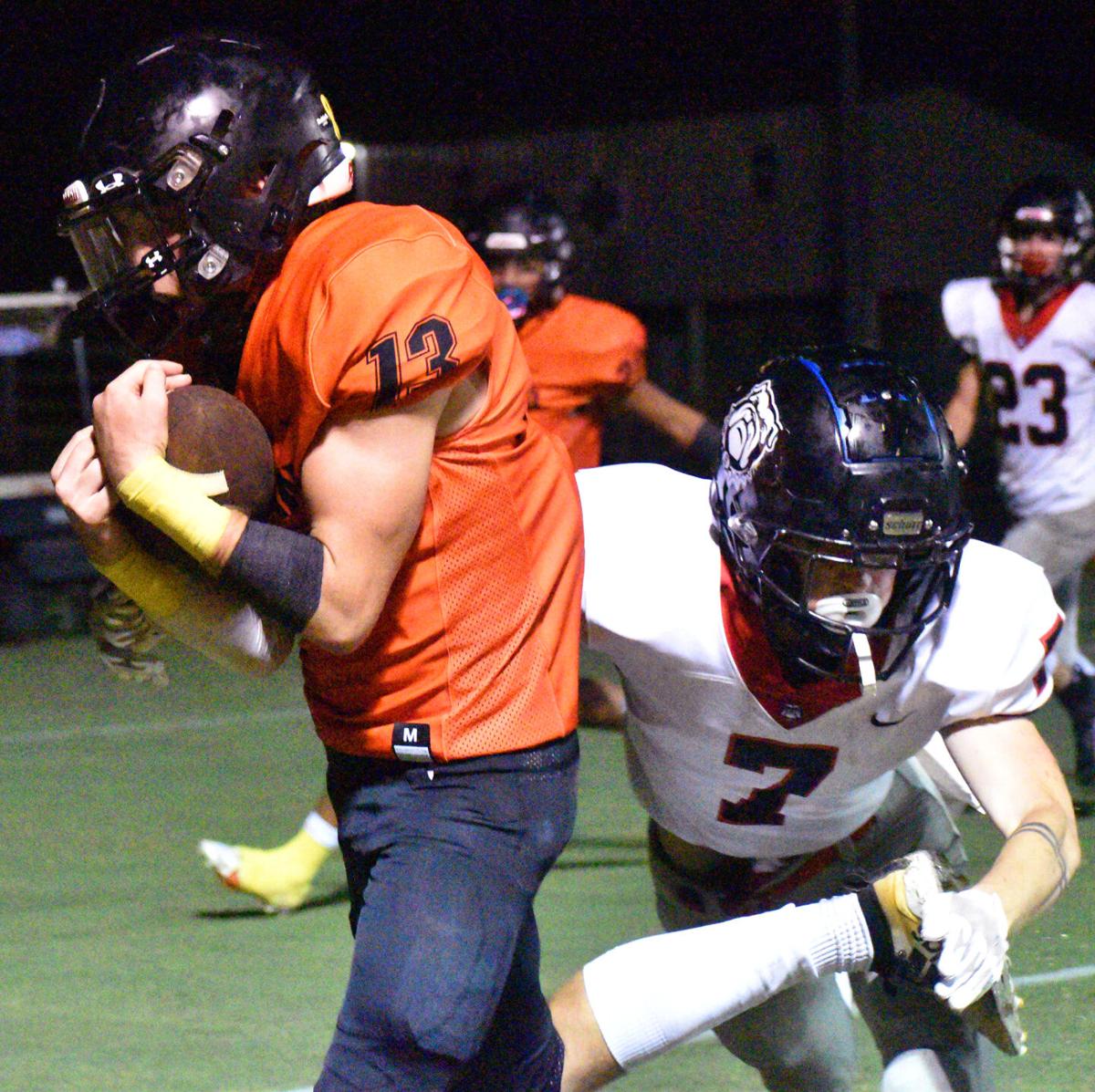 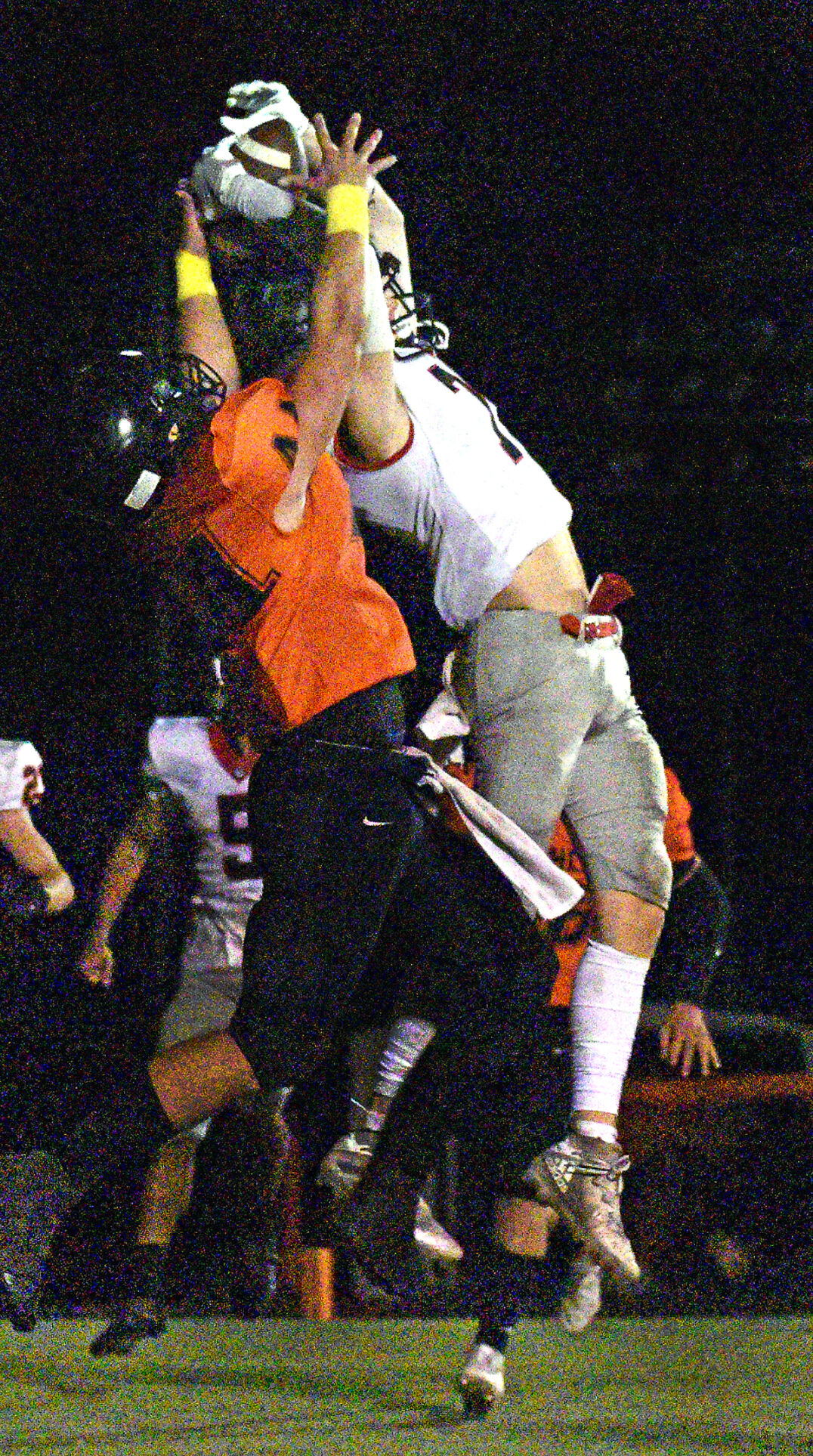 Richland’s Ben Teegarden steps up to make a tackle in the Richland Raiders’ victory versus Hickman County last Friday. The Raiders held the Bulldogs to 143 yards of total offense on the night.   Mark Mize / Pulaski Citizen

After scoring only one offensive touchdown in its first two games, the Richland Raider offense found the endzone six times in a dominant 42-7 victory over Hickman County Friday.

The Raiders (1-2) took down the Bulldogs (2-2) in a non-region contest, leading nearly from start to finish and needing only 2:16 to put the first points on the board.

The coaches opened up the playbook with a halfback pass on the game’s first play as former quarterback Sam Edwards rolled out off the pitch for a 39-yard pass to Tyrell Randolph. Four plays later, Edwards fumbled on a 11-yard rush, but Robert Pierce recovered the ball in the endzone for a touchdown and a 7-0 advantage.

Hickman County picked up one first down on a penalty before punting on the following drive, and the Raiders found themselves behind the chains with third and 21 to start the next possession. However, Bryce Miller found Ethan Workman streaking down the seam for a 75-yard touchdown to push the lead to 14-0 with 4:15 remaining in the first quarter.

Richland tacked on a final touchdown in the first quarter when a three-and-out set the Raiders up near midfield. Multiple unsportsmanlike conduct penalties against a frustrated Bulldog team set the Raiders up with a short first and goal. Andrew McCormack bullied his way to paydirt for a two-yard rushing touchdown to lead 21-0 with 35 seconds left in the opening quarter.

Hickman County converted multiple fourth downs on the team’s next drive, scoring the road team’s only touchdown of the night against a consistently strong RHS defense.

Richland marched into opponents’ territory twice more but settled for a punt and missed field goal to head into halftime with a 21-7 edge.

After forcing yet another punt, the Raider defense again set up the team’s offense in favorable territory. A sideline connection between Miller and Workman converted a third down to set up Edwards for a four-yard rushing touchdown.

By this point, Hickman County had changed to its more mobile quarterback option, but the following drive ended with a Trevor Meadows interception for Richland leading to a 35-7 lead four plays later.

Miller threw a jump ball into the endzone which initially appeared to be intercepted, but tight end Tyler Seals wrestled the ball away from the defender to claim a 12-yard touchdown reception.

Daniel Hewitt capped the night on the following drive with a 49-yard rushing touchdown.

Richland’s first team offense entered opponents’ territory on all eight of the team’s possessions and outgained Hickman County 387-143 in total yardage. The Raiders also averaged 9.4 yards per play in the victory.

Miller finished 6-of-7 passing for 117 yards and two touchdowns. Edwards rushed for a game-high 117 yards and a touchdown in addition to his 39-yard pass.

Pierce rushed for 52 yards and a touchdown on four carries.

Workman was the team’s leading receiver for the third-straight game to open the season with 98 yards and a touchdown on three receptions.

The Raiders return to region action this Friday with a home contest against Cascade. The Champions are 4-0 to start the season, highlighted by a region win over Mt. Pleasant.

Field Pass: Everything you need to know about Saturday's Arizona-Oregon football game

Badgers should have key defensive backs available against Notre Dame