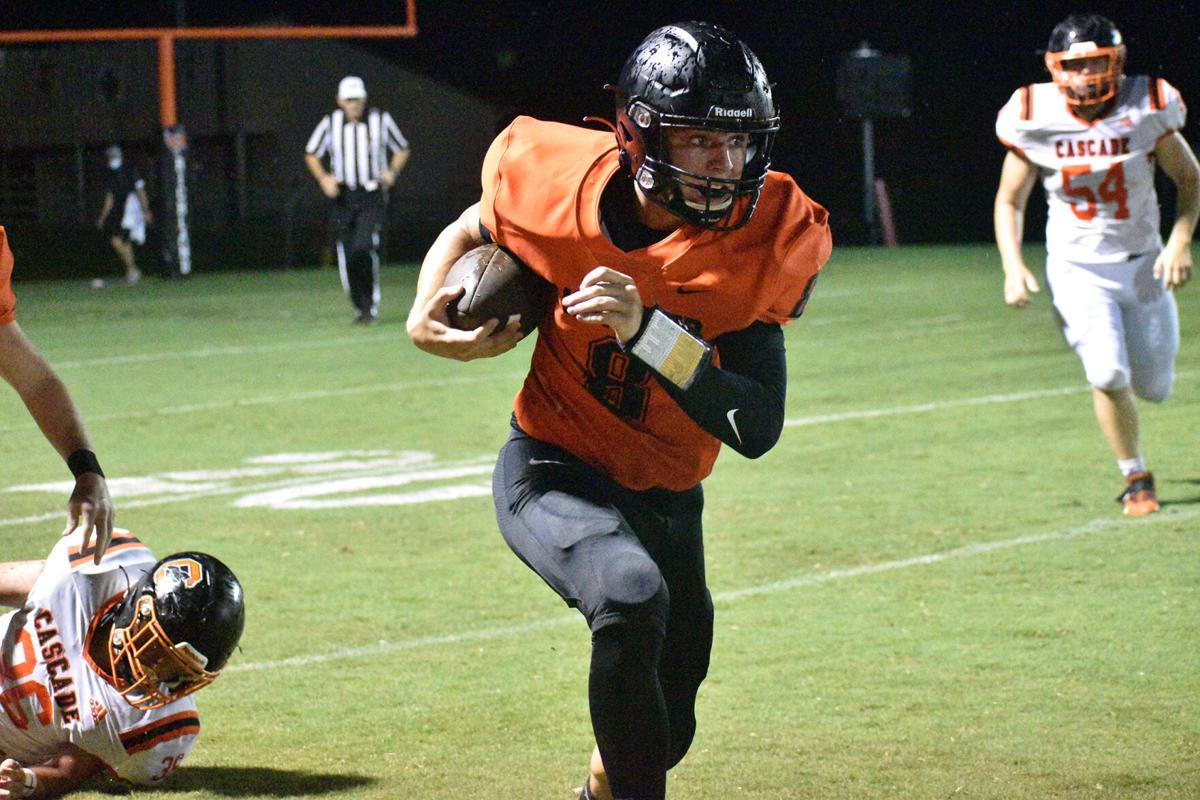 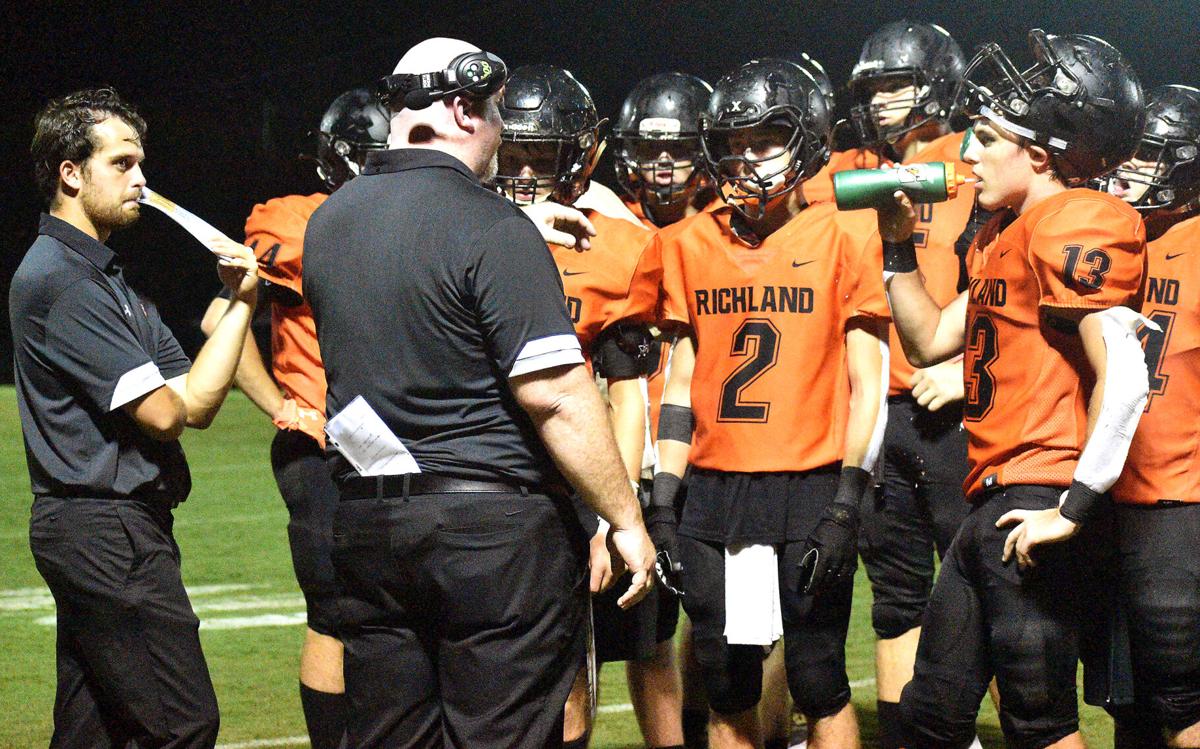 Richland head coach Nick Patterson delivers instruction during a timeout last Friday. The loss was the second defeat in the final 60 seconds of a ballgame this season for the Raiders.  Mark Mize / Pulaski Citizen

Richland running back Sam Edwards rushes to daylight during the Raiders last-second defeat Friday versus Cascade. Edwards finished the ballgame with 66 yards and two touchdowns on the ground for Richland.  Mark Mize / Pulaski Citizen

Cascade led for only one second of its region contest at Wayne Hobbs Stadium Friday night, taking on homestanding Richland High School.

That one second was the final one, though, as the Champions (5-0, 2-0 Region 5-AA) staged a 21-14 comeback victory and left the Raiders (1-3, 0-2) heartbroken and in need of a strong second half of the region season to keep their playoff hopes alive.

Richland’s defense, arguably its best unit of the last decade, had another strong outing, forcing two turnovers and holding Cascade under its season average in scoring and yardage. The team’s offensive line may have had its best outing of the year considering the opponent as well, showing both a triple option and spread look that saw a season-high in passing yardage for quarterback Bryce Miller and a respectable night running the ball for the team’s backs.

But penalties and missed opportunities in the red zone held the unit to just 14 offensive points one week after a breakout 42-point performance against Hickman County.

Richland forced a three-and-out on the Champions opening drive and marched down to the 15 on its first possession. However, back-to-back plays where miscommunication led to lost yardage resulted in a turnover on downs.

The Raider defense forced its own turnover on downs on the ensuing drive to give its offense strong field position. RHS again pushed into opponents’ territory, but saw the drive stall out inside the 40-yard line after a 30-minute weather delay due to lightning in the area.

Ethan Workman recovered a fumble on the following defensive series, leading to the first points of the night. Miller found Workman on pivotal third down plays twice on the drive. Sam Edwards converted another third down before rushing for a one-yard score and a 7-0 lead with 1:25 remaining in the second quarter.

On the ensuing kickoff, Tyrell Randolph forced a fumble, and Ben Teegarden picked up the loose ball to give RHS possession again in the red zone. However, with time running out in the half, the team chose to attempt a field goal on fourth and one, which sailed wide right to leave the score at 7-0 at the half.

In the second half, Cascade changed its offensive look to a spread formation and scored when quarterback Ryan Inmon broke containment on third and 11 for a 39-yard rushing touchdown to tie it up, 7-7.

The Raiders answered, scoring on a 14-play, 80-yard drive that again saw multiple third down passing completions from Miller to keep the drive alive and another pass to Workman on fourth and six to avoid a turnover on downs. Edwards capped the drive with his second rushing touchdown of the night from six yards out on the final play of the third quarter.

Cascade tied the game at 14-14 on the first play of the fourth quarter when what appeared to be a botched kickoff return by the Champions turned into a race to the end zone when the Raiders broke discipline on special teams coverage.

Fullback Robert Pierce rushed for a pair of first downs on the following possession before a key personal foul against the Raiders led to a punt.

The teams traded two more punts before Cascade received the ball at the opponents’ 41-yard line with a chance to win in the final minutes.

Inmon scored his second rushing touchdown of the night with one second remaining to complete the comeback and cap a seven-play, 41-yard drive.

Richland pitched the ball several times on a wild kickoff return to end the game which ended near midfield to clinch the Cascade win.

Miller finished 9-of-18 passing for 124 yards. Six of his completions converted third or fourth down attempts.

Workman led all receivers with five receptions for 89 yards as all five of his catches moved the chains. Austin Willis also caught two passes for 28 yards, both of which converted third down plays. Edwards picked up seven receiving yards on two screen plays.

Richland will play its homecoming game this Friday when the local team hosts First Assembly Christian School in a non-region contest. The Raiders still have three region games left on the season including Mt. Pleasant, Forrest and Loretto.

Richland will need to pick up at least two region wins to have a chance at the postseason and needs to sweep all three to clinch a playoff spot.

If Elgton Jenkins returns to action, Packers will face an unexpected-but-welcome tough call at left tackle