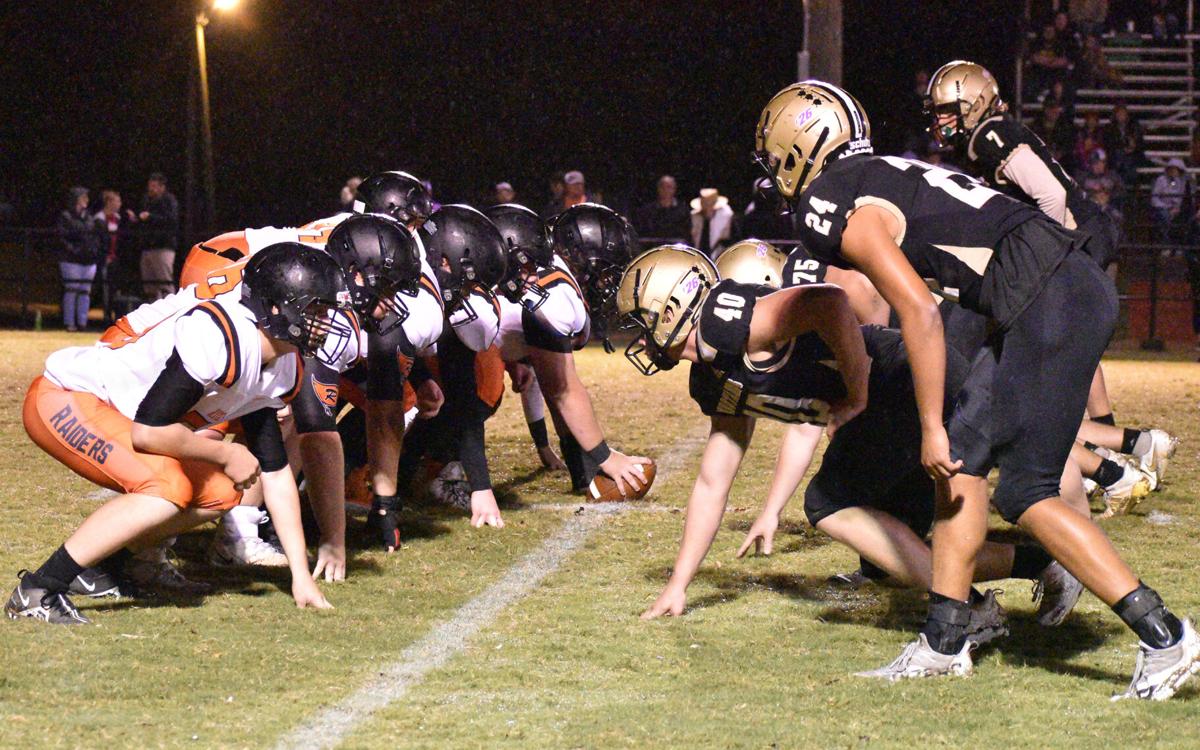 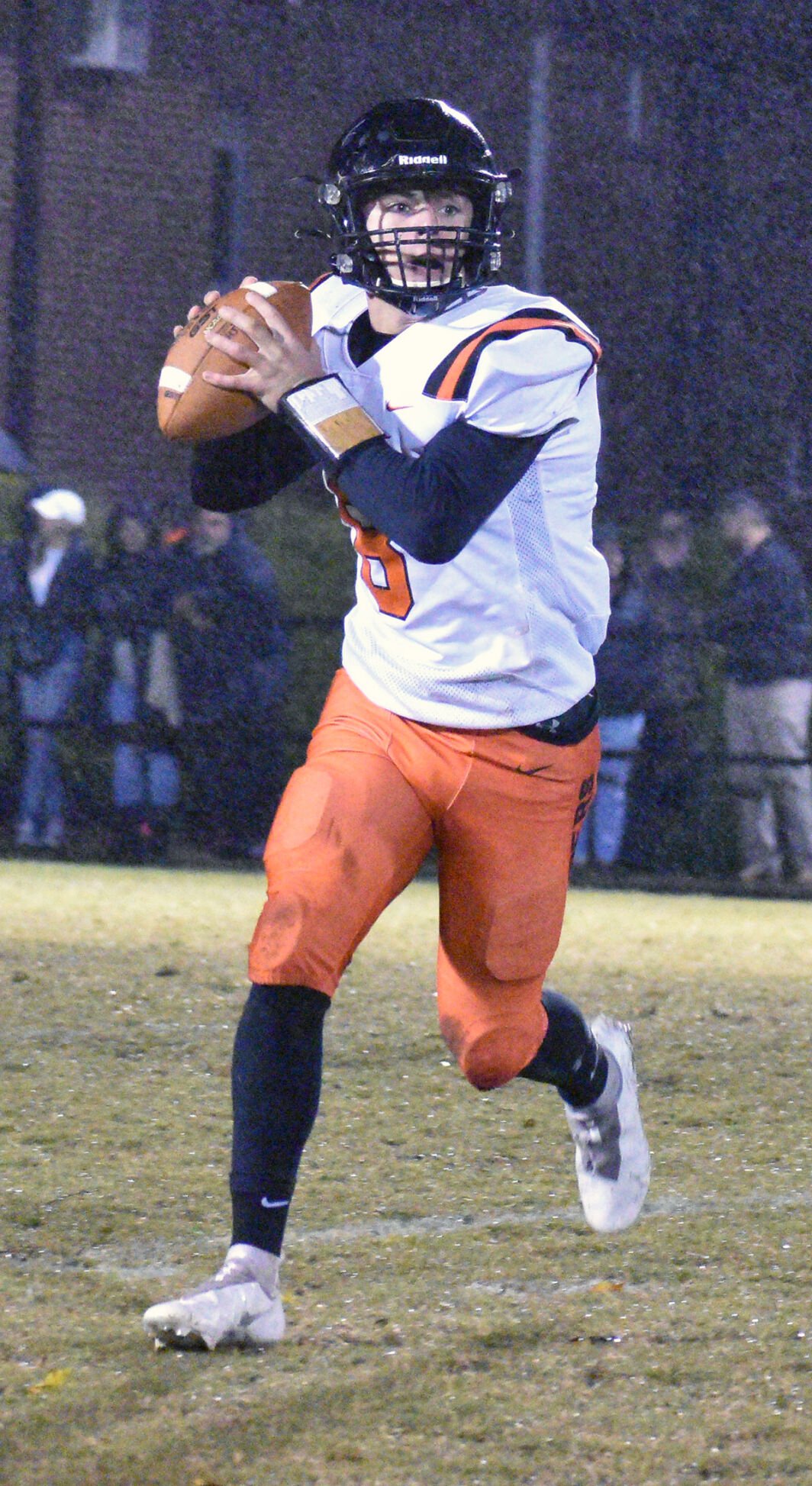 The Richland High School football program was poised to make its second playoff appearance in three seasons, needing only a win in the finale at Loretto to clinch a postseason appearance and a .500 season Friday.

However, the Raiders (4-6, 1-4 5-AA) turned the ball over on each of its first four possessions in a pouring rain storm, eventually falling 23-13.

RHS received the opening kickoff and immediately turned to aggressive play calling with a halfback pass on the first set of downs. The receiver was open, but the timing was off leading to an incomplete pass. Tyrell Randolph took the handoff on a jet sweep to pick up the first down, however, the Raiders fumbled on the following play.

The Mustangs (4-6, 1-4) took over possession at the opponents’ 31-yard line, but the RHS defense blew up a screen play in the backfield to keep Loretto off the board with a missed field goal.

On the following possession, RHS picked up three first downs before a fumble was picked up by Tabias Sirmones for a 55-yard scoop and score. Loretto led 6-0 with 3:29 remaining in the first quarter.

A one-handed interception for the Mustangs accounted for the third turnover with the Loretto offense this time cashing in. On fourth and four, Jaden Stults broke free for a 22-yard rushing score to push the home team’s lead to 13-0 on the first play of the second quarter.

The Raider offense chose to change things up with a wildcat package on the next drive featuring Sam Edwards taking snaps, and Tyler Seals acting as the primary running back. The gamble proved successful. Seals had carries of 16, 19, 13 and eight yards on the drive before the ball was stripped at the one-yard line.

The Raiders missed a field goal on their final possession of the half, while Loretto converted theirs for 16-0 halftime edge.

As the rain slowed to open the second half, the Raiders began to turn momentum back in their favor. The defense forced a turnover on downs when two-straight Mustang passes fell incomplete.

Richland took over possession at its own 41-yard line and went the distance in the span of seven plays. Quarterback Bryce Miller found Ethan Workman on a 29-yard pass to convert third down, and fullback Tyger Barnett closed the drive out with a six-yard rushing touchdown. The Raiders trailed 16-6 with 5:34 remaining in the third quarter after a failed two-point conversion attempt.

Richland’s defense forced a second-straight turnovers on downs, and the offense again marched into opponents’ territory. Another trick play pass, this time from Randolph to Workman for 23 yards, brought the ball down to the 24-yard line. However, a pair of negative plays led to a turnover on downs. Loretto scored on the following drive to take a three-score lead, 23-6, with less than four minutes left.

Richland was faced with a fourth and 23 on potentially its final offensive possession of the season. Miller went to his most reliable target, Workman, once again for a 32-yard pass to convert. On the following play, Miller called his own number on a 10-yard rush to find the end zone and bring the score to 23-13 with just 47 seconds remaining.

The Raiders failed to convert the onside kick, ending their season just one game shy of a postseason appearance.

Miller finished 6-of-14 passing for 105 yards, an interception and a rushing touchdown.

Edwards added 75 yards on 19 offensive touches. Seals chipped in 59 yards on six rushes. Barnett rushed for 11 yards and a touchdown on three carries. Workman led all receivers with 93 yards on four receptions. Randolph added 30 yards on two offensive touches and also completed a 23-yard pass on a trick play.

Loretto, Richland and Mt. Pleasant finished the season in a three-way tie for the last playoff spot, however, the Mustangs owned the tiebreaker to advance and play at Decatur County Riverside in the first round.

The Raiders remain a team on the upward trend, though, having now won 16 games in their past four seasons after winning just 11 in the previous nine.